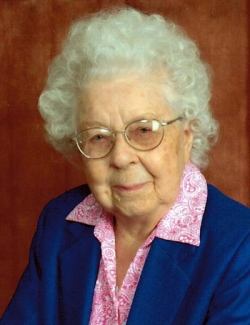 Crystal Leona Morey, 93, formerly of Lincoln and Gordon, Nebraska, went to be with the Lord on Friday, July 18, 2014 at her home. Born on January 13, 1921 in Gordon, Nebraska, she was the daughter of the late Everett and Pearl Hatch Phillips. Mrs. Morey was a member of Fayetteville Christ Fellowship.Mrs. Morey taught in a one room schoolhouse in rural Nebraska. She was a clerical and key punch operator in Nebraska and when she retired she was a supervisor for the Purchasing Department at the VA Medical Center in Lincoln, Nebraska. Besides her parents, she was preceded in death by her husband, Glenn Morey in 2007; three sisters, Olive Dorsey, Viola Phillips, and Byrdie Throop; and two brothers, Gerald Phillips and Roger Phillips. Left to cherish many wonderful memories include her daughters: Jeanette Morey of Chinook, WA and Marilyn Morey of Kokomo, IN; son, Robert (Esther) Morey of Fayetteville, WV; two grandchildren and a great granddaughter. Funeral services will be held at 1 PM, Tuesday, July 22, 2014 at Fayetteville Christ Fellowship with Rev. Robert Morey officiating. Visitation will be one hour prior. Memorials in Crystal Morey’s memory may be made to CODA Mountain Academy of Music, PO Box 615, Fayetteville, WV 25840.