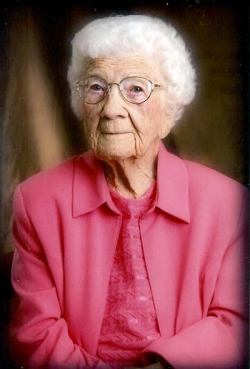 Her first years of school were in the Lehman School.  When she was an eighth grader, her family moved to the Extension community.  She lived in that community until moving into assisted living at the age of 100.  She graduated from Rushville High School in 1929.  The country was in a deep economic depression, and she worked at any job she could find for many hours a day.

She married Louis Reeves in 1932.  They had four children; Gerald (Jerry), Joyce, Maurice (Moe), and Hollis (Holly).  Louis and Carrie ran a service station/garage for a few years before moving to the family farm.  Carrie was an active community member.  She was a 4-H leader, PTA member and officer, Farm Bureau member and officer, and enjoyed garden club and bridge.  She loved flowers and gardening.  Louis would say that he might be forced to give up farming if her flower beds took over the fields.  Each year she planted fruit trees, but the elements and deer stopped the orchard she envisioned.

She worked 27 years in the Whiteclay post office, 14 as postmaster, retiring at age 75.  She loved spending time with friends and family-especially her sister, Marquerite.  The coffee pot was always on; she always had something freshly baked; and a meal could be prepared in a matter of minutes.

The family would like to extend their thanks to special friend, Lois Molitor, and her husband Roland, and to Park View Lodge and Pioneer Manor.

Funeral Services will be held Thursday, July 24, 2014, 10:00 AM, at Extension Community Chapel, Whieclay, NE, with Reverend Al Trucano officiating.  Burial will be held at the ExtensionCemetery.  Visitation will be held one hour prior to the service.

In lieu of flowers the family suggests memorials to Parkview Lodge or Pioneer Manor and donations may be sent in care of Chamberlain-Pier Funeral Home, PO Box 366, Gordon, NE 69343.