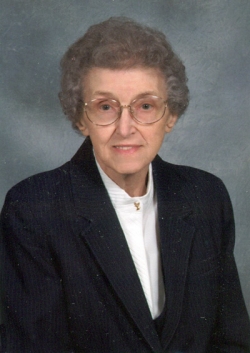 Edna Elna Hicks was born December 7, 1918, at Martin, South Dakota, the seventh of ten children born to Arthur and Blanche (Frickey) Hicks. Growing up on her parents’ farm near Martin gave her a love of the land and the rural life.Following her schooling, she worked as a waitress when she met a blue-eyed truck driver named Charles Ira Buckles. She married Charlie on November 12, 1941. To this union, two sons were born, Richard Charles and Keith Douglas.Edna and Charlie worked at various Nebraska Sandhills ranches with Edna sometimes cooking for the hay crew. Their plans for owning their own ranch came to fruition in 1966 when they trucked cattle onto the new Buckles Ranch west of Kadoka, South Dakota, just as the ’66 Blizzard hit. Despite the early setback, Edna loved her life on the ranch and the close knit community of the neighborhood ranches. Edna continued to manage the ranch briefly following Charlie’s death before she moved into Kadoka and eventually to Rapid City.Grateful for having shared her life are her son, Richard and wife Sharon of Rapid City, her grandchildren Marilee Buckles of Greeley, Colorado, Melanie and John Peterson of Lincoln, Nebraska, and Steffany and Atle Borsholm of Louisville, Colorado, her great-grandchildren, Christopher Young and Adria Johnson, Mikayla Young, Severn Young, Blake Peterson, Chase Peterson, Sean Peterson, Parker Peterson, Astrid Borsholm, Helena Borsholm, and Anders Borsholm, and a great-great-grandson Foster Johnson-Young. She was preceded in death by her son Keith, her parents, her husband, her siblings, Hazelle Bostock, Ellen Bostock, Floretta Briggs, Vera Mason, Viola Phillips, Huldah Phillips, Vada Peterson, Harold Hicks, and Audrie Larvie.Visitation will be held two hours preceding the services at the church. There will also be a public luncheon at the church starting at 11:30. Everyone is welcome.Funeral services will be held 1:00 p.m. Tuesday, August 5, at the Presbyterian Church in Kadoka, with Pastor Gary McCubbin officiating.Interment will be held 3:30 p.m. Tuesday, at the Gordon Cemetery in Gordon, Nebraska.

Arrangements are with the Rush Funeral Chapel of Kadoka.

Her online guestbook is available at www.rushfuneralhome.com