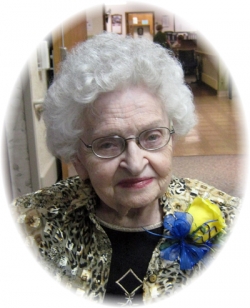 Audrey passed away on August 4, 2014 at Pioneer Manor Nursing Home in Hay Springs. She was 92.

She is the Lord’s child. Audrey Grace Perreten Drabbels was born July 19, 1922 in Omaha, Nebraska and was adopted twice over. She was adopted by Jonathan and Carrie Perreten, the parents who raised her. They were her mom and dad who took her to Sunday school and introduced her to a Heavenly Father – a Father who loved her and watched over her no matter the circumstances in her life. Romans chapter 8 also assures us that she has been adopted by her Heavenly Father and is even now bowing before Him and calling him Abba, Father.

Audrey grew up on a small farm northwest of Gordon, NE and attended school in the Pleasant Hill community through grade 12. Audrey’s husband, Virgil, took a shine to her there in the Pleasant Hill neighborhood at a very early age, and was reported to have, on numerous occasions, spent his entire allowance on packs of Dentine gum, which he would pass up the row of desks to her during their grade school days there at Pleasant Hill. Audrey graduated valedictorian of her class of three from Pleasant Hill country high school in 1939, alongside Virgil Drabbels, who was the salutatorian.

Audrey attended Chadron State Teachers College where she gained her teaching credentials. While at CSTC, she was tapped into the Cardinal Key honorary sorority, was editor of the college’s newspaper, and enjoyed her favorite sport’s pastime, playing tennis.  After college, Audrey taught school in Sheridan County, Nebraska and later taught in Idaho alongside her sister Ruth while she awaited the return of her lifetime sweetheart, Virgil, from his stint as a Marine serving in the South Pacific during WW II.

On February 3, 1946, shortly after Virgil’s discharge from the Marine Corps, Virgil and Audrey were married in Twin Falls, Idaho. They established their home in Gordon, Nebraska, where son Gary, and daughter Joan, were born. They later moved to the Gottier-Drabbels family farmstead south of Rushville, Nebraska where Virgil farmed and during which time, daughter Susan was born.

In 1955, Audrey moved with her husband and children to Hay Springs where she and Virgil owned and operated the Marshall Wells hardware store. The store later became Drabbels’ Coast to Coast store. Audrey’s main focus during that time was devotion to her family, helping out in the store, and serving in her church as Sunday School teacher, church organist, and in the various stations of the Women’s Society of Christian Service (WSCS). Audrey was a member of Chapter FO of PEO and loved writing and preparing programs for presentation to her WSCS and PEO sisters. Audrey served as Secretary-Treasurer of the Hay Springs School Board for several years and was recently honored for over 75 years of membership in the United Methodist Church.

Audrey loved being creative and shared that gift in many ways, among which were designing and building beautiful floats representing the store in the Friendly Festival and other area parades, decorating her home, designing and putting up lovely seasonal decorations at the store and at Pioneer Manor, volunteering her time to the residents of Pioneer Manor, and to training up her children to be of service in the community. Audrey loved to write and later in life, realized her dream of writing some devotional books and also books that shared in words her love for her children, grandchildren and great grandchildren. In 1983, Audrey was name Nebraska Nursing Home Volunteer of the Year for her years of selfless service to the staff and residents of Pioneer Manor Nursing Home.

Most important to Audrey was that her family, friends and acquaintances would learn about and know the Lord. She loved her time of daily devotions and prayed daily. She took to heart Deuteronomy 11: 18-21 which says: “Fix these words of mine in your hearts and minds; tie them as symbols on your hands and bind them on your foreheads. Teach them to your children, talking about them when you sit at home and when you walk along the road, when you lie down and when you get up.

During her lifetime, Audrey had a curiosity about her birth family and attempted to trace her birth roots. Less than a decade ago, her son Gary dedicated himself to assisting in the search and successfully made contact with her birth family, in her words, “the best gift he had ever given her”. As a result, the family was able to get acquainted with Marian Yonan, the only surviving sibling of her deceased birth mother, Ethel Woods.

One month prior to Virgil’s death, on February 3, 2012, Virgil and Audrey celebrated their 66th wedding anniversary, marking a lifetime of devotion to one another.