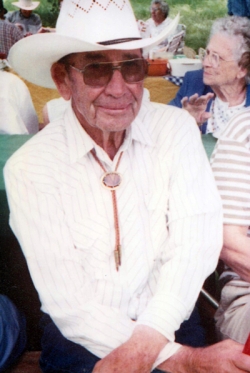 A celebration of Bud’s life will be held on Thursday, August 14th, 2014 at 2:00 PM at the Zion Lutheran Church in Hay Springs, Nebraska.  Burial will follow at the Hay Springs Cemetery with military honors.  Visitation will be held Wednesday evening at Chamberlain Chapel in Chadron at 7:00 PM.

Life-long Nebraska resident, Richard Otto Voss (Bud), 96, passed away on the evening of August 6th, 2014 with family near, at the Pioneer Manor Nursing Home in Hay Springs, Nebraska where he had resided since September, 2013.

Bud was born March 25th, 1918 to Otto Richard and Ida B. Scherbarth Voss in Buffalo County, Pleasanton, Nebraska off the South Loop River.  From an early age Bud developed his love for hunting and fishing and carried this interest throughout his life.  When Bud was 10, the family moved to the Hay Springs area and the home place was established 41/2 miles west.  His father thought the family would have a better chance of acquiring some land by moving, but the depression hit right after they moved in 1929.  They persevered like all the others of that era.  Moving with the large family in a railroad emigrant car were four head of horses, some machinery and 4 milk cows.

Bud attended grade school through the 8th grade at District 60 (former Anton Serbousek place) and graduated from the Hay Springs High School.  The first three years he rode a horse to school and often told us stories about the long ride in the cold weather.  His last year of high school was spent sharing a room with his brother Art, at a resident’s home in town.  Bud sang in a quartet with his brother Art, Burton Sheffner and Lewis Mendenhall.  He participated in FFA and excelled in the judging team with John Roth as his teacher, whom he greatly admired.  Bud had an artistic eye for judging animal conformation and always excelled.  After high school he worked for a number of ranchers and farmers in the area including Lawrence Bixby's Spade Ranch. From this he developed a great respect and love for the Sandhills and those who lived there.

Bud joined the Army Air Corp and served as an airplane mechanic during World War II.  He was able to travel all over the world.  From hearing his stories and looking at the pictures of that era, those days were characterized by camaraderie and humor under the pressures of wartime.

On March 19, 1947, Bud married the gracious Vivian Halverson.  Together they had six children and lived and worked on several different places before purchasing the family ranch.  In the 60's, land was acquired from the Egan family and later more land was purchased from the Brickner family.  Acquiring this land was a great accomplishment for Bud and Vivian and along with their family, received much enjoyment from it.

Bud was a loyal friend to many people in the area.  His enthusiasm for all things in mother nature was contagious and insightful.  His love of domestic and wild animals was revealed in his great respect for them.  In his lifetime he treasured his saddle horses and utilized them throughout his years of ranching, even riding a stallion into Hay Springs to do business at the bank.  Bud admired great cowboys which was one of the reasons he loved the songs of Ian Tyson.  He was fortunate to live in an era when this way of life rode strong and he played such a strong part.

Bud was baptized and confirmed in the Lutheran Church and was a life-long member of Zion Lutheran Church in Hay Springs, which his father and mother were charter members of.  He enjoyed singing in the choir and participating in Bible Class.

For friends and family who wish to remember Bud in a special way; memorials have been established at the Zion Lutheran Church in Hay Springs or the Hay Springs Fire Department and may be sent to the Chamberlain Drabbels Mortuary in Hay Springs, PO Box 443, Hay Springs, NE  69347.