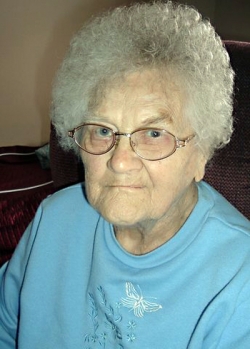 Norabelle Abbott, 90 of Hay Springs passed away at Pioneer Manor on August 10, 2014.

Norabelle (Votruba) Abbott was born June, 18, 1924 at the homestead 5 miles North of Hay Springs. Norabelle was the oldest of five brothers and five sisters. She attended grades 1-8 at the country school about a mile from her parents homestead. Norabelle married Orville Abbott February 15, 1941. To this union three children were born: Marie (Golightly), Marion (Gasseling) and Jim (Abbott).

She worked at the Matt Heesacker Packing Plant for 15 years until it closed. She also was a Cub Scout Den Mother and an Avon representative for many years until she retired. Norabelle was very active in the Blue Bonnet Garden Club and VFW Auxiliary.

Many hours were spent preparing May baskets for the Blue Bonnet Garden Club, doing her crafting, gardening and taking care of her flower beds. She enjoyed watching the birds and rabbits in her front yard. Norabelle took great pride in listening to and watching the various activities her grandchildren and great grandchildren were involved in.

A memorial has been established for the Hay Springs Ambulance or Pioneer Manor Nursing Home. Donations may be sent to Chamberlain Drabbles Mortuary P.O. Box 443 Hay Springs, Ne 69347.