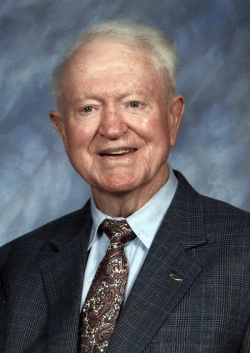 Keith was born in Lincoln, Nebraska in 1921, and graduated from the University of Nebraska with a Bachelor degree in Music Education in 1942. After serving in the US Army Air Force during the war, he earned a Master in Music Education degree in 1947. It was at the University that he met and married the love of his life, Helen. Keith’s life was dedicated to excellence in the teaching of choral music at the high school and junior college levels for schools in Gordon, Nebraska and both Highland Park and Ferndale, Michigan. Tireless in his love of liturgical music, he also directed choirs for many years in churches wherever he and Helen lived.

Upon retirement in 1979, Keith and Helen spent winters in Sun City, Arizona where they were members of the First Presbyterian Church of Sun City. Summers were spent on Drummond Island, Michigan where they had been coming since 1963. In May of 2001, they became permanent residents of Drummond Island enjoying the visits of family, friends and many former students. The Sturdevant family expresses gratitude for the exceptional love and care he received from the hands of Joyce Meyers, Nancy Black, Mary Anderson, Dorothy Larrabee, Loren Deal and Christine Cordray FNP-C. The family also wishes to thank Sheri Walker RN, the Drummond Island Ambulance Service and EUP Home Health & Hospice.

R. Galer Funeral Home, 24549 S. M-129 in Pickford, Michigan is serving the family. Condolences may be sent to the family at www.rgalerfuneralhome.com.