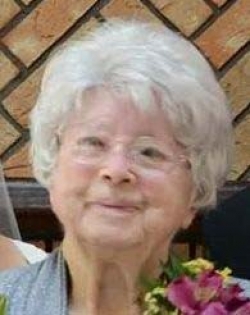 Betty married Raymond A. Leisy June 11, 1944 in Alliance and then made their home on the ranch north of Ellsworth. They later moved south of Alliance to Storm Lake Ranch, where they raised their four children, Raymond “Chuck”, Donna, Larry and Paula. She was a member of the First Christian Church in Alliance until retiring to Scottsbluff in 1993 where they attended Grace Chapel. In her retirement years, she enjoyed painting pictures, tending to her many flowers and the yard. She also spent many hours crocheting many useful items, some of which the patterns where her own.

She was preceded in death by her husband, Raymond in 2011; her parents, Charles and Gertude Gilbert of Alliance and Raymond’s parents, John and Martha Leisy of Alliance; sister, Irene (Floyd) Moberly of Texas; brothers-in-law, John and Alvin Leisy; sister-in-law, Ellen Payton; grandson, Corey Leisy; and great-grandson, Conner Mann.

Friends may call at Dugan-Kramer Funeral Chapel in Scottsbluff from 2 p.m. to 7 p.m. Tuesday and from 2 p.m. until service time at Pleasant Point Church on Wednesday.

In lieu of flowers, memorials have been established to Grace Chapel or to Pleasant Point Church. Tributes of sympathy may be left at dugankramer.com.