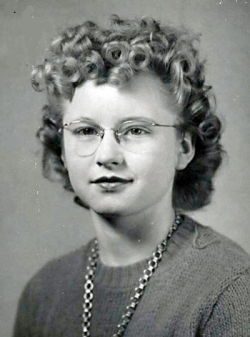 She was born on January 15, 1929, to Curt and Mary (Stevens) Merrihew at Hyannis, Nebraska. She had two brothers, Robert and Knight Merrihew. She attended a rural grade school, School of Agriculture at Curtis, Nebraska and Chadron State College.

She was married to Larry L. Bixby, son of Lawrence Y. and Eleanor Bixby at Alliance, Nebraska on October 28, 1947. To this union they had six children.

She was an avid bowler, fisherman, flower gardener, loved reading and watching Major League Baseball. She resided at the Bixby Ranch north of Ellsworth until October of 2013 when she moved to Alliance. She was a member of American Legion Auxiliary Post 34, Sandhills Chapter of D.A.R., Flying Farmers and Ranchers of Nebraska, and the Live and Learn Club.

She is survived by her children, Lance (Angelica) Bixby of Ellsworth, Teri (Ted) Junge of O’Neill, NE, Joni (Rickey) Blanchette of Bullhead City, AZ, Mari (Marshall) Garner of Hyannis and Marni (Steve) Harris of Glenwood, IA. She is also survived by 15 grandchildren and 26 great-grandchildren.

She was preceded in death by her parents, her husband Larry, her son O’Ryan, her brothers, Robert and Knight, Larry’s parents, Lawrence and Eleanor.

Funeral services will be Thursday, September 4, 2014 at 1:00 p.m. at the Bates-Gould Chapel in Alliance with Pastor Mickey Blair officiating. Burial will be in the Ashby Cemetery with Pastor Andy Safarik officiating at graveside. A reception will be at the Ashby Congregational Church following interment.

In lieu of flowers, the family requests memorials be given to the American Legion Auxiliary Post 34, Gordon, Nebraska, 69343, the Sandhills Chapter of D.A.R., or to a charity of the donor’s choice.

Online condolences may be left at www.batesgould.com. Bates-Gould Funeral Home is in charge of the arrangements.