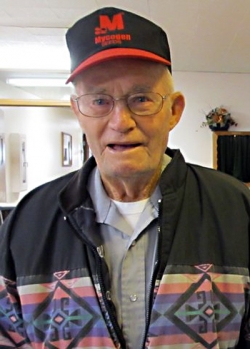 Funeral services for Donald Huckfeldt of Chadron, Nebraska will be held on Monday, September 8, 2014 at 2:00 PM at the Zion Lutheran Church in Hay Springs with Pastor Allan Wierschke officiating.  Burial with Military Honors will be at the Hay Springs Cemetery.  A visitation will be held on Sunday, September 7, 2014 at Chamberlain Drabbels Mortuary from 5:00 to 6:30 PM.

Donald Huckfeldt, 91, of Hay Springs, passed away to meet his Lord and Savior on September 4, 2014.

In 1943, Don, joined the Army and fought in WWII and was a life member of the American Legion.  In 1944, he married Merlyn June Hays, in Aniston, Alabama; they were married 49 years, until Merlyn’s death in 1993, and to this union were born 3 children, Cheryl, Dean, and Darrell.

Don loved farming which made his life and livelihood.  He also had a love for baseball, which he played and coached for many years.

A memorial has been established for the Hay Springs Fire and Rescue Department, Donations may be sent to Chamberlain Drabbels Mortuary, PO Box 443, Hay Springs, NE  69347.