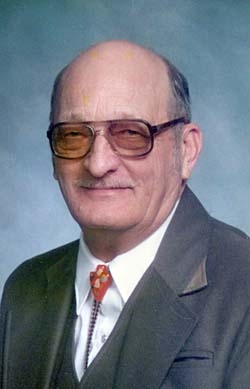 Albert was born on January 20, 1924 at Alliance, Nebraska to John and Martha (Kicken) Leisy.

Bus grew up in the Sandhills and attended the one room Leisy school house in Sheridan County through the 8th grade.

Upon returning from the service he ranched and ran the original homestead north of Ellsworth before moving to Alliance. He ran a feed store and motorcycle shop for several years. Albert went on to farming in the Norfolk area and later was in sales in Ogallala. After retirement he lived in North Platte until moving to the Western Nebraska Veterans Home.

Survivors include his children, Roger and Kathy Leisy of Longmont, CO, Gay and Ken Lange of Box Elder, SD, John and Cindy Leisy of Gillette, WY, Glen and Tammy Leisy of Riverton, WY, Jeff and Karen Leisy of Cody, WY, Brett Leisy of Missouri Valley, IA and a daughter-in-law, Linda Leisy of Alliance; 23 grandchildren and 37 great grandchildren. He is also survived by his sisters, Lucille and Albert Fletcher of Brooksville, FL and Shirley and Ron Drimmel of Rapid City, SD; and his sisters-in-law, Rita Muhm and Leona Perrin, both of Alliance.

He was preceded in death by his parents, infant sister Helen Louise, sister Ellen Leisy Payton, brothers Johnny, Raymond and Alvin and his infant daughter Joy and son Mike.

Funeral services will be held Tuesday, September 23 at 10:00 a.m. at Bates-Gould Chapel with Jeanie Sedivy officiating. Burial will be in the Nebraska Veterans Cemetery at Alliance with full military honors. Visitation will be Monday, September 22 from 1:00 p.m. to 7:00 p.m. at the funeral home.

Memorials may be given to the Nebraska Veterans Cemetery, P.O. Box 718, Alliance, Nebraska, 69301 or to a memorial of the donor’s choice.

Online condolences may be left at www.batesgould.com. Bates-Gould Funeral Home is in charge of arrangements.