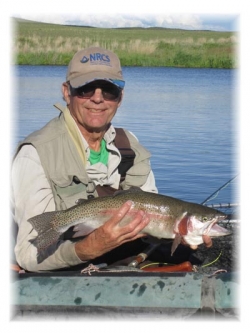 Deceased October 18, 2014
George was born in Alliance Nebraska on February 22, 1939 to Leonard (Bill) and Lillian Kosmicki. He graduated from St. Agnes Academy in Alliance and then attended St. Louis University. After college George served in the U.S. Army, was honorably discharged, and then began work on his parent’s wheat farming operations in Nebraska and South Dakota. In the late 1960s George farmed with Harold Kosmicke in Martin SD and then started his own farming operation. In 1974 he married Dixie Becker and adopted her son Patrick. Dixie and George then had two more sons, Joseph and Nicholas.
Besides being a successful and conscientious farmer, George was also an accomplished hunter and fisherman, a passion that began when he was a child and continued to his final days. During his big game hunting pursuits George was able to collect three of the four North American wild sheep, trophy class bull elk, mountain caribou, moose, grizzly and black bears, antelope, and dozens of mule and whitetail deer. Many of these trophies mark his hunting legacy and still grace his home. George was also a devout bird hunter and dog trainer, raising numerous golden retrievers during his life, including his last and best dog - Bruno. George never lost his zeal for hunting, even collecting a huge mule deer just last year, but in his latter years he also became an accomplished fly fisherman, artfully tying most of the flies that he used.
George was a loving and devoted father, son, and brother and will be remembered for his wonderful sense of humor and his gentle and humble nature. He will be greatly missed by his family and friends, who’s world was enhanced immensely by his presence and will not be the same without him.
George is survived by his three sons:
Joseph and wife Tanya of Martin, SD
Nicholas and girlfriend Heather of Fort Collins, CO
Patrick and wife Tanya of Rapid City, SD
and seven grandchildren: Madison, Kaleb, Carter, Jordan, Jonni, Marcus, and Aster.
Also, sister Helen Berry and husband Jerry of Chadron, NE. brothers Nick and wife Kay of Greeley, CO, and John and wife Susan of Windsor, CO.
He was also a God parent to Shane McCarthy, Matt Kosmicki, Jason Kosmicki, and Melanie Radant.
He was proceeded in death by his parents Leonard and Lillian Kosmicki and his favorite hunting companion Bruno Kosmicki.
In lieu of flowers the family would request donations to Georges charities, Covenant House and Catholic Relief Services, and donations may be sent in care of Bennett County Funeral Service, PO Box 65 Martin, SD 57551.
Funeral Services were held Wednesday October 22, 2014, 10:00 AM at Our Lady of the Sacred Heart Catholic Church, Martin, SD.  Burial with military honors was held in Our Lady of the Sacred Heart Catholic Cemetery.