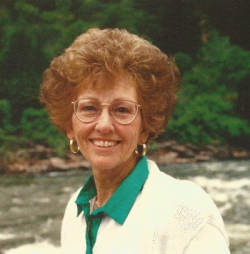 Helen was born February 18,1934 in Whitman, NE to Rueben and Virginia Mooney.  She graduated from Gordon High School in 1951.  After graduation Helen worked as a dental assistant in Gordon, NE.  Helen married James (Jim) Gran on August 20,1955 in Gordon, NE.  Jim and Helen where blessed with 5 children; four sons and one daughter. The majority of Helen’s life was spent as a full time mom and rancher’s wife.  As the children grew and attended high school Helen worked as an assistant to the principal at Gordon High School.

Helen was a member of St. Leo’s Catholic Church in Gordon and was involved in the Alter Society and Legion of Mary.  Helen was also very active in the Nebraska Cattlemen’s Association serving as the president.  She earned the Top Hand Award  and was also honored by the Omaha Woman’s Chamber of Commerce for her achievements in the cattle industry.  Helen enjoyed crafting, sewing, gardening and cooking.  At Helen’s house no one was ever a stranger, they where always friends she hadn’t met yet.

Helen was proceeded in death by her parents Rueben and Virginia Mooney and her sister Mary Kohl.

A Rosary will be held on October 31st at 7pm at St. Leo’s Catholic Church.

Memorial Service will be held November 1st at 10am at St. Leo’s Catholic Church in Gordon. Burial will follow the funeral at the Gordon Cemetery.  Honorary pallbearers will be Kyle Gran, Nathan Gran, Jacob Gran,Connor Parette, Adam Parette and Layne Johnson.