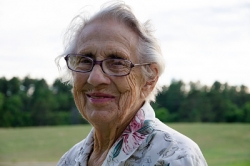 Flora Louise (Frey) Krotz passed away at her home November 1, 2014. She was born December 1, 1917 in Alliance, NE to Swiss immigrants, Paul and Frieda Kunz-Frey. Her father was located by Old Jules Sandoz on his homestead in 1899.

Flora attended Cottonridge District 73 one room schoolhouse, going to school in a buggy and horse. She graduated from Rushville High School in 1934. She attended Teachers Classes and taught at the Dykes rural school for several years.

She married Stanley Krotz May 4, 1942. Stanley passed away January 17, 1979. They lived on the farm Stanley’s parents, Anton and Anna Krotz, homesteaded north of Rushville. Flora loved their farm and her wish to always live there was fulfilled. She worked hard, milking cows, raising chickens, tended to a large garden, her yard and her apple trees. She started working at the Rushville Sale Barn Cafe in 1957, becoming manager in 1971. She retired in 1998. Her long work day there started before 5 a.m.. Everyone around Rushville and buyers from far away knew about and loved her great homemade meals and especially her pies and rolls!!

During her almost 97 years, she saw many changes. She grew up in a 4-room sodhouse (which still stands), traveled by horse and buggy and dirt-trail roads, had no telephone, electricity, plumbing, big machinery, etc. She enjoyed traveling to many places in the USA, Canada, Switzerland and Alaska.

Flora was a wonderful mother, grandmother, aunt, friend, neighbor and role model to many. She was always excited about the future and lived a Christian life. She loved her pet dogs and cats. She loved seeing photos on her photo viewer and always kept up on her family’s happenings.