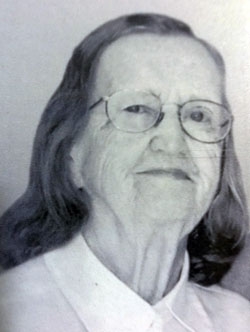 Emily Griffing, 97, of Lincoln passed away November 2, 2014. Emily Marie Griffing was born November 11, 1916 to Emil and Amelia (Nielsen) Frandsen at Dannebrog, Neb. Her family moved to Hay Springs, Neb. when she was five years old. There, she attended rural schools and was a 1934 graduate of Hay Springs High School. That same year, Emily moved to Lincoln to attend the University of Nebraska on a Regents Scholarship. She would make Lincoln her home for the remainder of her life. While at UNL, she was a member of Kappa Phi sorority. After graduating from UNL in 1939, she taught at Utica Schools for one year. On August 2, 1940, Emily married her college sweetheart, Lawrence Dale Griffing. The couple celebrated 70 years of marriage in 2010. Emily was employed by the University of Nebraska Libraries and UNL Chemistry Department before becoming a full-time mother to her two sons. She later went on to be an employee at several Lincoln Public Schools elementary libraries from 1966 to 1983.

Volunteering was of great importance to her. She found time to lend a hand to several organizations including as a Cub Scout Den mother when her boys were young, Trinity United Methodist Church, of where she was a long-time member, the Lied Center, the State Historical Society, where she maintained the McDonald Photography Collection, Foodnet, as well as several years at Lincoln General Hospital.

Survivors include her sons, Marlon “Buster” (Norma Cox) Griffing of St. Paul, MN; and Lawrence “Larry” Griffing of Lincoln; grandchildren, Max and Lillian Griffing of St. Paul; a sister, Idonna (Leo) Weyers of Hay Springs; as well as numerous nieces, nephews and other relatives. She was preceded in death by her husband Dale; her parents; sister in law, Carol Jean Griffing; brothers, Berwyn, Haskell, and Robert Frandsen; and a sister, Pauline.

A Celebration of Emily’s Life will be held November 5, 2014, at 10 a.m., at Eastmont Towers (6315 O Street) in Lincoln. Memorials in Emily’s memory may be directed to the Don L. Love Memorial Library (318 Love Library, Lincoln, NE 68588). Please visit www.lincolnfh.com to share memories.

More in this category: « Flora L. Krotz Darrell A. Haberman »