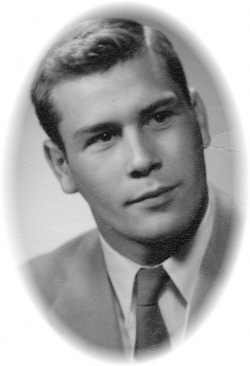 On October 31,  2014, Darrell A. Haberman, 76, of Hay Springs, played his final round.  The “Pup”, as he was known by his golf and card playing friends, unexpectedly died at Rapid City Regional Hospital.

He was born August 30, 1938 in Hartington, NE to Louis & Margaret Haberman (Potts).    Darrell grew up in Hartington and after high school enlisted in the United States Army, serving in Germany at one point.  After his honorable discharge in August, 1962, Darrell worked for Consumers Telephone Company in Lincoln, NE as a lineman.

Darrell (Waldo), married Sue (Lotta) Dooley in Hartington, NE on January 24,1964 in Hartington, NE.  Working with various telephone companies took Darrell and his family to Custer and then Hay Springs.  Darrell was a member of the American Legion and was a avid golfer and card player.

He was proceeded in death by his parents, an infant brother,  sister Clarice of Antioch, CA and brother Larry, of Springfield, NE.

It was Darrell’s wish not have a memorial service.  In the summer of 2015, family and friends will gather to have a golf memorial in his honor.  At that time, memorials may be given to the Hay Springs Golf Course.