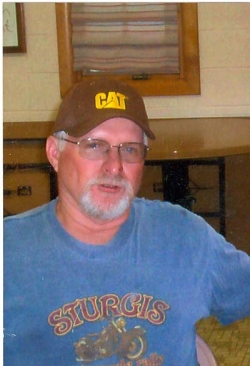 Funeral Services for Jerry Sweeney will be held at 10:00a.m., Monday, November 10, 2014 at Family Life Church, Pastor Marty Crump officiating. Visitation will be held, Sunday, November 9, 2014 at Gillette Memorial Chapel from 5:00 p.m. to 7:00p.m. Jerry Sweeney was born on September 29th, 1955 in Gordon, Nebraska to George and Patricia Sweeney. Surrounded by his family he went home to heaven on Tuesday November 4th, 2014.  He moved to Gillette, Wyoming in 1972 where he started his family, while working with his brother Pat at S&S Electric in 1978. Later, Jerry became a master electrician working for the City of Gillette and finishing his remaining days as an electrical inspector for the county. He was a loving and devoted father, grandfather and friend. He will be truly missed by all who had the pleasure of knowing him. Jerry was a proud “papa”, attending all of the grandchildren’s activities from dance to gymnastics, t-ball and soccer in rain or shine. He enjoyed riding his Harley with friends and family, taking pictures of scenic mountain views and enjoying the freedom of the open road. He was a member of the Gun Club and an active member of Family Life Church. He is survived by his four children; Caleb and Amy Sweeney and their children; Madison, Jalia, Lilly and looking forward to a new addition due in May of 2015.Toni and Jeremy Urich and their children; Hadley, and Aiden, Bridget Hertel and her children; Tori, Tana and Tylie, and Quentin and Lenna Hopkins and their children; Porsche and Little Q. Jerry is also survived by his brothers; George, Michael, Pat and Dennis Sweeney and sisters; Susie Becker and Nancy Scherr. He was preceded in death by his mother and father Patricia and George Sweeney. The family requests that memorials be made in Jerry’s name to Family Life Church, as it was his passion to travel on a mission to Africa with them. Memorials and condolences may also be sent to Gillette Memorial Chapel 210 West 5th Street, Gillette, WY 82716 or via webpage: www.gillettememorialchapel.com

More in this category: « Darrell A. Haberman Doris May Dreyer »