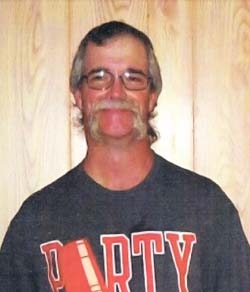 Dwight Eliot Porter was born October 13, 1961, in Ord, Ne. to Lawrence and Marlyn (Jensen) Porter. He was the second of five children. His mother passed away when Dwight was six years old. Dwight attended school in Bassett, Ord, Springview, and Central City. On August 3, 1967, he accepted Christ.

Dwight married Shari Cozad on October 29, 1978, in Wood Lake, Ne. To this union a son, Bryce Leigh Eliot, and two daughters, Ronnie Nicole and Chelsea Jean, were born. In the spring of 1993, Dwight married TJ McConaughey in Martin, SD. From this union, two more sons were added to the family, Bailey Tyrel and Devon Lee.

Dwight enjoyed telling stories, razzing his nieces and nephews, his horses, cattle, and dogs. Dwight worked for several ranchers in the area. In 2004, he began ranching for himself in the Taylor and Brewster areas. He also did some mechanic work and was a social butterfly.

Dwight Eliot Porter passed away peacefully with his family by his side on November 8, 2014 at the Great Plains Regional Hospital in North Platte, Ne., after a courageous fight with cancer. He was 53 years old. Dwight was preceded in death by his mother, Marlyn; sister, Kimberly Wagner; brother, Ernest (Skip) Porter; nephew, Martin Porter and TJ Porter.

Funeral Services were held on November 13, 2014 at the Hoch Funeral Home in Ainsworth, Nebraska with Don Painter officiating over the service. Casket Bearers were: Tony Dunbar, Bryce Porter, Mike Worm, Danny O’Kief, Mike O’Kief and Chris Gall. Special CD selections of “Over You” by Miranda Lambert and “Daddy’s Hands” by Holly Dunn were provided. A video presentation was shown to the music of “Affirmation” by Savage Garden. Burial was held at the Bassett Memorial Park Cemetery at Bassett, Nebraska. In lieu of flowers, memorials were directed to the family in Dwight’s name. Online condolences may be made to the family at: www.hochfuneralhome.com