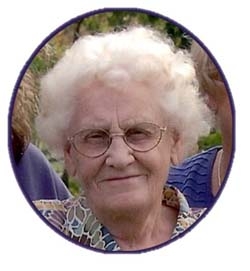 Alice Mae (Galbraith) Winter, age 88, passed away on November 23, 2014, at Regional West Medical Center in Scottsbluff, Nebraska. She was surrounded by all of her loving children, grandchildren, great grandchildren and a special niece.

Alice was born on February 14, 1926, to James and Ethlean (Spicknall) Galbraith in Spencer, Nebraska. She graduated from Spencer High School in 1943, and then attended Wayne Teacher’s College. She taught in several rural Sheridan County schools. While teaching, she met Dexter Winter and they were married in Spencer on June 19, 1948. They were blessed with four loving children, Julie, Joan, John and Jean. Alice worked for many years at Sheridan Livestock.

Alice always made her famous chocolate chip cookies and cinnamon rolls for her children and grandchildren. She was an avid Denver Bronco fan and enjoyed watching football on TV. Alice also enjoyed bowling on a league. Her favorite hobby was crafting. She made quilts for all her children and grandchildren. She enjoyed sewing numerous items that she displayed at craft fairs. She was still working on various projects at the time of her death.

Alice was a wonderful loving wife, mother, grandmother, great grandmother, sister, aunt and friend. She will be greatly missed by all who knew her.

She was preceded in death by her husband of 58 years, her parents, brother Howard and sisters Mary, Geraldean and Delilia.

A memorial has been established for St. Mary’s Holly Episcopal Church or the Osteoporosis Foundation and donations may be sent in care of Chamberlain-Pier Funeral Home, PO Box 366 Gordon, NE 69343.