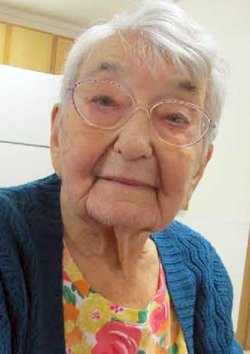 Funeral Services for Martha A. Krotz, 99, of Hay Springs, Nebraska will be held on Wednesday, December 31, 2014, at 1:00 p.m. at St. Mary’s Holly Episcopal Church north of Rushville, Nebraska with Reverend James Krotz officiating. Burial will be at the Hay Springs Cemetery.

Martha passed away on Wednesday, December 24, 2014, at Crestview Care Center in Chadron.

Martha was born at the Kruml Farm north of Hay Springs to Adolph and Ethel Vladyka Kruml December 14, 1915. She joined sisters Pauline and Ellen, and they later welcomed sisters Amelia and Irene.

On October 2, 1935, John Frank Krotz and Martha A. Kruml were united in marriage at St. Mary’s Holly Episcopal Church. To this union four children were born, Janice, Kenneth, James, and Jerald.

Martha and John made their first home 10 miles northwest of Rushville, and in 1940 moved to their farm southwest of Hay Springs.

Martha was involved in her community, where she wrote Community News for several newspapers. She was an active member in the Worthwhile Club, VFW, and at St. Mary’s Episcopal Church she taught Sunday school and worked in the Altar Guild. She also enjoyed art and music and sang in the Hay Springs Chorus and played the piano for area school children’s competitions.

She was preceded in death by her parents, husband, sisters, sons Kenneth and Jim, son-in-law Gene Lenhard, daughter-in-law Betty and grandson Shane Lenhard.

In lieu of flowers, memorials may be sent to St. Mary’s Holly Episcopal Church, the Hay Springs Ambulance Fund or a charity of one’s choice. Donations may be sent to Chamberlain Drabbels Mortuary, PO Box 443, Hay Springs, NE 69347.