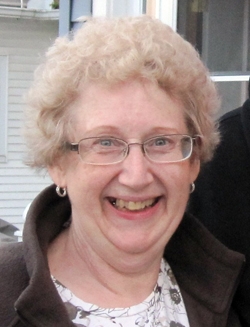 Mary Ellen Sharp passed away peacefully at her home in Gordon, Nebraska on Tuesday, December 23, 2014. She was born October 10, 1946, in Marshall, Minn. to Maynard and Lula Hodges and grew up on her parents’ farm in Southwest Minnesota. In 1964, Mary Ellen graduated from Central Catholic High School in Marshall, and shortly thereafter moved to South Dakota to work as a secretary at the Holy Rosary Mission on the Pine Ridge Indian Reservation. While in South Dakota, she met the love of her life, Walter Sharp, and they were married October 28, 1967.

Mary Ellen and Walt started a family at Sharps Corner, S.D. where Walt ran a general store. In 1977, they moved to Rapid City, South Dakota and opened Hobby Craft in the Baken Park Shopping Center. Mary Ellen was active with the Boy and Girl Scouts and taught CCD at Blessed Sacrament Catholic Church. Mary Ellen and Walt moved to Gordon, Neb. in 1990 to manage the Sioux Nation Shopping Center in Pine Ridge. In addition to her work at Sioux Nation, she worked for several years at Debbie’s Cake and Floral Shop, the United Methodist Church, and most recently, at KSDZ radio station. Mary Ellen was tremendously involved in her community including being the President of the Music and Dramatic Club and an active member of St Leo’s Catholic Church. Mary Ellen was very proud of her five children and six grandchildren.

Chamberlain-Pier Funeral Home of Gordon was in charge of arrangements.

More in this category: « Martha A. Krotz Norman Dean Edwards »