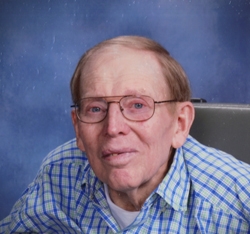 Marty Dean Downing passed away peacefully on December 26, 2014, at his home in Scottsbluff.

A memorial service will be held on Friday, January 2, 2015, at 1 p.m. at the Shepherd of the Hills Lutheran Church in Hyannis, with Reverand Richard H. Neugebauer and Reverand  Andrew Safarik officiating. Cremation has taken place; there will be no viewing and final committal will occur privately at the Cedarview Cemetery in Mullen.

Memorials in Marty’s honor may be directed to the family and will be designated at a later date.

Marty was born to James Harry and Avis Louisa (Boyer) Downing on April 15, 1940, in Hyannis, Neb. He received his early education at a small country school near the family ranch 30 miles north of Hyannis. Marty attended High School at University of Nebraska School of Agriculture in Curtis, Neb. and graduated with the Class of 1958. After graduation he went on to attend college at the Milford Technical College in Milford, Neb.

He married Marian Folk on June 3, 1962, in Mullen, Neb. Marty and Marian made their home north of Hyannis on the family ranch. There they lived and ranched for 46 years, and upon retirement sold their ranch and made their home in Scottsbluff, Neb.

Marty’s greatest pride was his family and greatest passion was ranching and raising black angus cattle. He was at the height of his glory training his best cow dogs (Jack, Fritz, Rex & Ben) working with them by his side to bring in, sort or feed his cattle. In his later years, as his mobility lessened, he loved working his word puzzles, tuning in on every Nebraska Cornhusker football, volleyball and basketball game.

Marty is survived by his wife Marian of Scottsbluff, his sons James (Toni) of Crowheart, Wyo. and Tim (Bonnie) of Dunning; daughter Mardee (JR) of Scottsbluff; grandchildren, Tyler (Rebecca) of Riverton, Wyo. and Katelyn of Grand Junction, Colo., Taylor and Brett of Dunning, Channing of Laramie, Wyo. and Harrison of Scottsbluff; brother, Mick (Bertha) of Whitman; brother and sisters in laws, numerous nephews, nieces and cousins.

He was preceded in death by his grandparents, Harry V. and Sadie (Cole) Downing; and parents, James H. and Avis (Boyer) Downing.