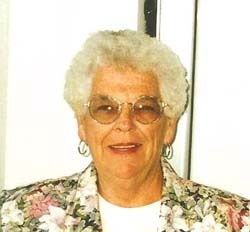 Lois grew up in Gordon. She attended Gordon High School through 10th grade where she met her future husband, Bob Retzlaff. Lois eloped with Bob to Hot Springs, SD in 1954. They shared 60 incredible years of marriage.

During her early years of marriage Lois moved with Bob around the area for various ranching jobs, and proved time and again her determined, devoted spirit and work ethic. A favorite story about her involves being chased by a bull when she was 7 months pregnant with Vance. Lois tossed her toddler, Mary, over the fence and vaulted behind her to avoid the bull. Lois would have many years to follow of caring for her children and grandchildren. She was first and foremost an unconditionally loving mother and grandmother. If any child was around, her lap was virtually never empty.

Never afraid of hard work, Lois took positions working in Reeve’s grocery store (White Clay); helped Bob run a gas station (Pine Ridge), a bowling alley and Jumping Eagle Inn (White Clay). She was the much loved lunch lady for the Clinton Dist. 26 School in the ‘70s. She later worked as a clerk at Shedeed’s Wear House (daughter’s store), and finished out her working years keeping books at Ag Repair which she and Bob owned from 1990-2009.

Lois loved nature. She was always watching out her window for birds and spent many hours planting and tending her flowers and beautiful vegetable garden. Her baked goods were unrivaled, and generously shared with anyone who dropped in for a visit. No one ever left hungry.

Lois was preceded in death by her parents and brother Dallas Evans.

Memorial services will be held at the Chamberlain-Pier Chapel in Gordon, Neb. on January 31, 2015 at 2 p.m.

A memorial has been established and donations can be sent to Chamberlain-Pier Funeral Home, PO Box 366 Gordon, NE 69343.