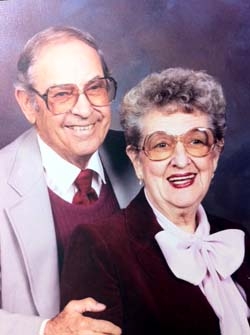 Esther Ireland was born in Gordon, Nebraska, on October 22, 1915 to Fred and Jean Case Ireland. She died in Visalia, California on January 28, 2014 at the age of 99 at Delta Nursing Home.

Fred and Jean had two more children while living in Gordon; Evelyn (Evie) and Wilfred (Bill). Mary Jean was born after they moved to California. Esther graduated from Gordon High School in June of 1933 as a member of the Honor Society, then went to Hastings to attend business college. Jack Scovel, son of Lula and Jack Scovel, earned enough money by working in the oil fields of Wyoming to buy a car to go get her and they were married at home in Gordon August 8, 1937.

Esther worked as an administrative assistant for the division manager of the Southern Counties Gas Company in California for over 25 years while assisting Jack with a walnut orchard and the Shamrock Bar. They were both active members of St. Paul’s Anglican Church, serving on many boards as ministers of the Bible with Cursio Teaching Group. Esther hosted a bridge fund-raiser for over one hundred tables for the church for many years, was on the Altar Guild and served on the Grand Jury for two years. She was also the President of the Gas Company Retirees and their traveling group called “Gashoppers,” with whom they traveled all over the US and Canada in their motor home.

Jack and Esther were active members of the Farm Bureau and Walnut Growers, taking many tours around the world with them to the Holy Land, Hawaii, Australia, parts of Europe, New Zealand, Japan and to England, where Jack served in WWII. Esther and Jack were also part of SERVAS, so hosted travelers from around the world, then visited them in return. Since she was a great fisherman and loved camping, she loved to share her love of the Sierra Nevada Mountains with family and visitors.

Evie, who married Forest (Frosty) Brown, Esther, and brother Bill Ireland took a motor home trip to Gordon in 1999 to visit friends and family. They held a picnic in the park and enjoyed visiting with the small group. Evie, Frosty and Bill have preceded Esther in death.

Esther is survived by her sister, Mary Ireland Pryor and many nieces and nephews. Memorial services will be held at St. Paul’s Church on February 20, 2015 at 2:00 p.m. and donations in memory of her active involvement there would be appreciated. St. Paul’s Church, 120 North Hall, Visalia, CA 93291. Interment will be at Evergreen Conference Camp at Oakhurst, CA.