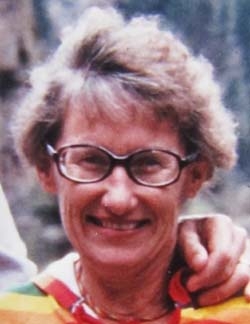 E. Lorraine Hindman, 82, of Lincoln, died Sunday, Feb 1, 2015 in Lincoln. Her Celebration of Life service will be held at 1pm on Monday, Feb 16, 2015 at the First United Methodist Church, 2002 4th Ave, Scottsbluff with Reverend Matt Fowler officiating. Private family inurnment will follow at a later date. The family respectfully requests that in lieu of flowers, memorials in Lorraine’s honor be made in care of the church. Online condolences may be left at www.jolliffefuneralhome.com. Jolliffe Funeral Home in Scottsbluff is in charge of arrangements

E. Lorraine (Fankhauser) Hindman was born January 3, 1933, the youngest of 11 children of Hans & Evangeline (Aubert) Fankhauser in Rushville, Nebraska. Attending school in Clinton and Rushville, Lorraine graduated from Rushville High School in 1950 and began her teaching career at age 17 in a one-room schoolhouse. She married Dean Raymond Hindman on June 28, 1952. They lived in Scottsbluff for their entire married life. Lorraine and Dean had 4 children: James Dean, Jodene Lori, Douglas William and Janette Irene.

While her kids were still young, Lorraine commuted to Chadron State College and earned her BS in Elementary Education in 1968. She taught in Scottsbluff Public Schools for over 25 years at Lincoln Heights and Westmoor Elementary Schools. Lorraine was a longtime member of First United Methodist Church in Scottsbluff and American Association of University Women. She loved playing bridge, square dancing, hiking Scotts Bluff, Nebraska history and traveling. She accomplished her goal of being in all 50 states and traveled to Europe; especially enjoying Switzerland, the home of all her ancestors. She loved little children, particularly her grandchildren.

Lorraine moved to Lincoln in 2002 living at the Legacy Terrace, The Arbors and Madonna. She sang in the Lincoln Senior Chorus. She sang her entire life and could play almost anything on the piano by ear.

She was preceded in death by her parents, sisters Bette Petersen, Ruth Clark and Helen Dekker; husband Dean, and son Jim.