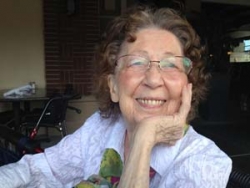 Geraldine (Jerry) Engler Hollstein was born January 15, 1921, in Stuart, Neb. to Andrew and Elizabeth (Bouska) Engler, the second oldest of four daughters. Jerry was baptized February 13, 1921, at St. Boniface Catholic Church in Stuart. She was a loving, nurturing woman who always thought of others first, gave of herself without hesitation; and touched so many people with her sweet smile, kisses, hugs and gentle way.

Jerry grew up in Atkinson, Neb. with her older sister, Kathleen and two younger sisters, Natalie and Mary Ellen. She had a very large, loving and supportive extended family with her father having six brothers and her mother having two brothers and four sisters. Her grandparents, many aunts and uncles, and numerous cousins lived in the Atkinson and Stuart area, so, as you can imagine, there were endless family gatherings and celebrations.

She attended St. Joseph’s Catholic School in Atkinson from first grade to eleventh grade, and then because St. Joseph’s had closed, finished her senior year at Atkinson High School graduating May 20th, 1938. Jerry was accepted into nurses training in 1939 to St. Anthony Hospital School for Nurses in Denver, Colo. She started nursing school August 1, 1939, and graduated with her RN degree August 21, 1942.

After nursing school Jerry was affiliated with Children’s Hospital in Denver, Colo.; and began her nursing career at a Children’s Hospital in Virginia Beach, Va. in 1942 - 1945. Later she returned to western Nebraska and was the Director of Pediatric Nursing at the hospital in Alliance from 1945 – 1946, and then head of nursing at the Hay Springs hospital from 1946 – 1948. The dedicated doctors relied on her gentle and caring nursing skills; and she always said her two favorite nursing duties were caring for children and being a surgical nurse. In the 1950s, 60s and & 70s Jerry worked at various times at the Rushville Hospital and was also a private duty nurse caring for many local residents. In her 60’s and 70’s Jerry generously cared for and nursed elderly relatives and friends selflessly and tirelessly.

Jerry met Robert Hollstein shortly after moving to Hay Springs. They were married from 1947 to 1991 and raised four children, Don, Gary, Jim and Dianne. They were living in Hay Springs until 1957 when Bob was running the Hollstein Meat Market. The family moved to Rushville in 1957 when Bob had the opportunity to join his brother Bill in the Hollstein Packing meat business there. Jerry was a devoted wife and mother, and always said “my children are a testament to my success in life”. She and Bob enjoyed seeing their children grow up and participate in all kinds of school sports, band and other activities. Her devotion to her children continued throughout her life, including going to Lincoln to watch Gary play for the Nebraska Cornhuskers, attending graduation ceremonies, weddings and enjoying many glorious Christmases, Easters and holidays throughout the year.

Cooking and entertaining gave Jerry great joy. She often would host large family gatherings, especially at Thanksgiving and Christmas which often included cooking a huge meal with turkey, her favorite pies and cakes, and all the trimmings which everyone enjoyed immensely.

Jerry was a devout Catholic of great faith and unwavering devotion to our Savior Jesus Christ and the Blessed Virgin Mary. She was active in the Immaculate Conception Altar Society in Rushville, assisted as a Eucharistic Minister for mass and taught CCD classes as well as confirmation classes. Her younger sister, Natalie Engler (Sister Nicole) was a Benedictine nun at Mount Saint Scholastica in Atchison, Kan. Sister Nicole often led pilgrimages to the Holy Land, and Jerry was able to make a very memorable trip there along with her sister Mary Ellen, Maxine Hollstein and Terri Jones in 1984.

Rushville was her home until she fell and broke her hip the day before Memorial Day in 2006. After hip replacement surgery in Scottsbluff she went through therapy and later recuperated in Denver, Colo. with her son Jim and daughter Dianne. That was a great time to enjoy each other’s company and to do many things together in the Denver area.

An apartment became available at Prairie Pines Retirement Home in Chadron, Neb. and Jerry lived there from late 2006 until December of 2011 when Jim and Dianne wanted their mother closer to them, so she move to Denver. She then lived within a few blocks of Jim at Porter Place Assisted Living until May of 2014 when she was admitted to the hospital with pneumonia. She recovered from that, and after rehabilitation moved to Clermont Park with skilled nursing on July 1, 2014. She made many new friends in Denver and was always the first to reach out and give a new acquaintance a big hug. She had ups and downs in her health at Clermont Park but was always kindly aided through the rough times by the very capable and loving staff.

During the past few months she was doing very well and enjoyed life. Jim and Dianne were there to help and be with her every evening and on all special occasions. Over the past four years in Denver she had many family members and friends come to visit. For several summers she was treated to visits by her first cousin, Marlene Grossman, and her family of professional musicians who performed concerts for Jerry as their guest of honor, and for residents of Porter Place and Clermont Park.

Jerry will be adoringly remembered by her family, relatives and many, many special friends.

She is survived by her son Gary and his wife Karen of Sioux City, Ia., her son Jim of Denver, Colo., her daughter, Dianne and her husband Ric Brooks of Greenwood Village, Colo., her sister Kathleen Lynders of Bloomingdale, Ill., her sister Mary Ellen Steinman of Hawthorn Woods, Ill., four grandsons, two granddaughters, three great-grandsons, and many loving cousins.

She was preceded in death by her father and mother, her sister Natalie, her oldest son Don, and many aunts and uncles.

Jerry will be missed greatly but she has finally ‘Gone Home’ to a better place. What joy she must be experiencing now that she is reunited with dear family and friends that have gone before her!

There will be a rosary Friday, March 6 at 7:30 p.m., and the funeral mass Saturday, March 7 at 10:00 a.m. - both are held at the Immaculate Conception Catholic Church in Rushville. Burial service will be at Fairview Cemetery immediately following the funeral mass. A noon luncheon will then be hosted by the Altar Society where guests can share their fond memories of Jerry along with a lifetime of her photos.

In lieu of flowers memorials have been established with the following:

Mt. St. Scholastica, Atchison, Kan, – a memorial in Jerry’s name has been established

Donations should be sent to Chamberlain Chapel of Chadron, P.O. Box 970, Chadron, NE 69337

(Please state with your donation which memorial you are donating to)