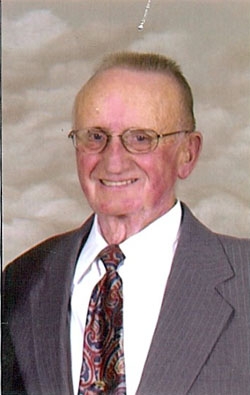 He was born at home 2 ½ miles SW of Rushville on December 18, 1931 to Anton and Edna (Taggart) Rasmussen. He was the second child of three, which included brother Bill, and sister Eleonora. At the age of 4, he started school in the First Grade at District #58, three miles west of Rushville. The District closed in 1945. Brant attended Rushville High School, graduating in 1949.

He was inducted into the U.S. Army on January 20, 1953, serving his country for two years while stationed in Austria with the 350th Infantry Regt 72nd Infantry Co. Heavy Mortar with the occupation forces. While serving in Austria, Brant’s job was as a Radio and Telephone Operator. He drove the Communications Truck.

During his one year in Austria, Brant had the opportunity to go on R&R to Denmark, where his Dad had been born in 1896. He stayed with an aunt and uncle and two cousins for two weeks and met his Grandfather who was still riding a bicycle at the “young” age of 88. His Grandfather lived to be 92.

In 1955 he met Moneen Clements, and they were married in 1958. Together they raised four children: Tony, Andy, Anita and Alex. They lived their entire married life on the Rasmussen home place NW of Rushville. Brant farmed, raised cattle, and did small appliance and TV repair until he retired in 1988. They celebrated their 50th wedding anniversary in 2008.

He and Moneen went back to Austria in 1995 with USFA, an organization of veterans who had served with the occupation forces after World War II and the beginning of the Cold War. The two of them went to the annual reunions stateside for several years, meeting many new friends from across the US.

Brant was a life member of the American Legion, having served as County Commander in 2001 and was Post #161 Finance Officer for a great many years. He had also been on the Firing Squad. Brant was selected as Legionnaire of the Year in 2002.

In 1960, he joined the NW Nebraska Vintage Car Club. He was a proud owner of a 1924 Model T Touring Car, a 1931 Model A Roadster convertible, a 1952 Chevrolet Deluxe sedan, a 1963 Chevrolet Biscayne, a 1968 Ford Custom 500, and a 1985 Ford Mustang convertible. He always claimed that he bought the Mustang with the money he saved by quitting smoking.

Brant enjoyed participating in tractor pulls and going on tours around the area with his old tractors.

The family suggests memorials to the Rushville American Legion Post #161 or to St. Paul’s Lutheran Church and donations may be sent in care of Chamberlain-Pier Funeral Home, PO Box 366, Gordon, NE 69343.