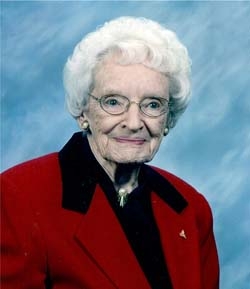 On Christmas Eve, December 24, 1911, William Sidner and Alyce Sydnie (Higgins) Reno were gifted with the arrival of their baby daughter, Myrtle Irene, at rural Clinton, Nebraska. She and her family moved to the LimeKiln homestead. Later they lived at Patton Creek east of White Clay, the home she remembered as the happiest in her childhood. The family moved to Clinton where they ran a general store. Myrtle and her three younger brothers, Everett, Norval and Emery attended school and at the end of that day, she opened the store, minded the brothers and made potato soup and cocoa for their supper. She claimed to be a whiz at that.

Myrtle finished high school in three years at the insistence of her parents and claimed the honor of valedictorian-then laughingly admits there were only two in her class. She attended Chadron State Normal School that summer and taught rural schools-one was eight miles from her home. She rode a borrowed horse and opened barbed wire gates to welcome the students whom she loved so much. She said they were always so cute and smart. Her thirty-five dollar monthly salary was given to her family for their needs.

She married Julius C. Johnson on September 17, 1931, at Valentine, Nebraska. They welcomed a son and two daughters through the height of the depression. She always said it was not so bad to be poor as everyone else was. The birth of two more daughters in the WWII years completed the family.

They were plagued by drought, hail, blizzards, winds and even floods, but persisted in their love of land and its produce. Myrtle canned at least 300 quarts of food each year from her lovely garden and raised 300 chickens every year. That bounty served well as their farm home was a gathering place most weekends for relatives and friends. She was ambidextrous and famous for her angel food cakes and divinity, which were the result of the wire whip used by both hands. Her kitchen was always open and all were welcomed.

She was an avid card player - pinochle and bridge and others. Bridge was her favorite. After Julius died in 1965, she moved to Gordon and worked as a florist and clerk until becoming City Librarian for sixteen years. She loved helping students find their information and was especially pleased when years later, a young person remembered her for that. She was listed in the 1976-77 Who’s Who in Nebraska. The story gives credit to her life in being a daughter, sister, mother, teacher, clerk, florist, homemaker, farmer’s wife, 4-H Leader, member of Sheridan County Extension Board, Republican, member of the National Library Association, memberships in Pleasant Hill (charter member) Extension Club, Flower and Garden Club, Social and Improvement Club and Library Round Table. She was an avid reader, who read books, magazines and newspapers. She also solved the crossword puzzles, the jumbles and soduko. She welcomed twenty grandchildren into her life and home. They remember the fun of the pool table in the farmhouse basement and the dress-up clothes (which they recall making a mess of, but were never told to clean up).

She was a life long member of the Methodist Church and particularly treasured her young Clinton years in Epworth League at that church and faithfully served in the United Methodist Women’s Circles.

Myrtle was known for her green thumb, but often added that it was black. Sometimes her kitchen smelled of warm dirt-rightly so-as she baked it to kill unwanted organisms before planting. She always had a house full of “bloomers” – violets, amaryllis, cactus, geraniums and orchids, among others. Starting new violets with a leaf from the old and a new rose bush with a stem from an old was her special talent. In late years, keeping the plants was her pastime. Often she said, “I don’t know why I’m still here.” The answer was easy – no one else could care for those plants – she had to do it! After an illness a few years ago she said, “I have gone through many doors, and I am not ready to go through that last one.” After a brief hospice care time, she did go through that door to meet her Lord on Tuesday, March 3, 2015.

Myrtle lived every day with this belief, saying “Tomorrow will be better.” So now we all must know “tomorrow will be better” and we remember that as that last door has closed. “Mizpah” was written at the end of all letters from her loving mother-in-law and so Myrtle would wish the same to all.