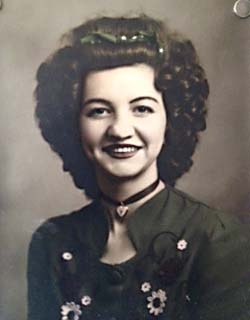 Helen was born January 6, 1926 at Winters, Texas to George and Edith (Hart) Dowell. The family moved to Gordon, Nebraska where she received her education. She married Derrell Suhr and the couple later divorced. Helen raised her family in Gordon before moving to Gering in 1968, where she lived until the time of her death.

Helen worked at Regional West Medical Center as a Nurses Aide for over twenty years. She was a member of the Seventh Day Adventist Church, enjoyed doing crafts – cross stitch, sewing, and plastic canvas, and loved her flower gardens. She made the best fudge. She was an avid reader, loved to read her bible, and enjoyed watching Tom and Jerry cartoons. She was a devoted mom, grandma, and great-grandma.

Helen was preceded in death by her parents, son Frank, great-grandson Trey, and four brothers.

Cremation has taken place and a memorial service will be held at 10:30 on Friday, March 20, 2015 at the Seventh Day Adventist Church in Scottsbluff with Pastor Ken Maldonado officiating. Inurnment will follow at West Lawn Cemetery in Gering. Memorials may be given to Panhandle Humane Society or the church. Dugan-Kramer Funeral Chapel is assisting the family. Her obituary may be viewed and condolences left at www.dugankramer.com