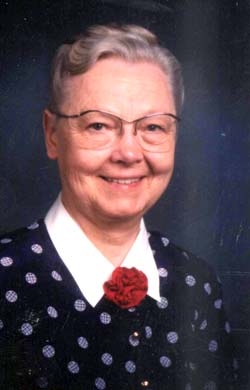 Funeral services for Eleanor Sandoz, 89, will be held on Tuesday, March 31, 2015 at 2:00 p.m. at Chamberlain Chapel in Chadron with Doyle Smith and Richard Raschke officiating. Burial will be at Fairview Cemetery in Rushville.

Eleanor Sandoz was born July 12, 1925 to Henry and Ruth Sandoz in Hay Springs, Neb. Eleanor’s early childhood was spent on the family homestead about 30 miles south of Rushville, Neb. At the time there was not a school close so Eleanor was sent to stay with her Johnson grandparents, Gustave and Laura Johnson in east Nebraska to go to school there. For high school Eleanor was sent to the boarding school at Curtis, Nebraska for a couple of years and finishing high school at Rushville, Neb. Eleanor went on to Normal Training, which was a summer session at Chadron, Neb. and then taught at rural schools in Sheridan County for 8 years. Some of the rural schools she taught at were the Joe Leach School, the Spade School, Dist. 133.

It was in this part of her life that Eleanor embraced the gospel that had become a guiding force in the Henry Sandoz family. In the Al Nelson home on a Sunday morning she professed her desire and intent to serve God. This was a new chapter in Eleanor’s life and lead to new and wonderful changes. She had been quite involved in pretty things, parties and living for herself. This choice in her life brought another great change in her life and in 1951 she offered her life to be used by God and she served Him in the homeless ministry preaching the wonderful gospel we read about in the Holy Bible. Eleanor spent the rest of her strong years preaching the gospel in Nebraska, Wyoming, Wisconsin, Minnesota, North Dakota, Colorado, and Utah. She had a kind heart for the lost soul and was very helpful to many people to see God’s word as a useful guide in their life.

In later years Eleanor’s health made it hard to live the homeless preacher’s life so she had an apartment in Utah, Rushville, Neb. and Alliance, Neb. From there she spent a little over a year at the Red Bud Care Home in Guthrie, Okla. She greatly appreciated the fellowship of the other fellow soldiers of this ministry and the gentle nursing care of Francis and Mary Beth Sager.

Eleanor is preceded in death by her parents Henry and Ruth Sandoz, brother and sister in law Ronald and Dorothy Sandoz, sisters: Annabelle Sandoz Smith and Hazeloraine Sandoz Nelson, along with numerous uncles, aunts and cousins. Ken Sandoz of Scottsdale, Ariz. is Eleanor’s last living brother of the Henry Sandoz family. There are many nieces, nephews and friends that miss the old Eleanor we loved and admired.