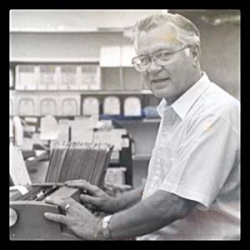 Frederick Conn (Fritz) Wefso, 86, died Friday, March 27, 2015 surrounded by his loving family, at the Pioneer Manor in Hay Springs, Neb. Fritz was a “bigger than life” man, touching so many lives. The legacy Fritz leaves behind in service and good works is extraordinary. And those affected by his contributions may have benefited in ways that they don’t even realize. The legacy we may remember and carry with us most about Fritz is not what he did, but who he was. He was kind beyond expectation. He thought of others before thinking of himself. His two most spoken lines were “What can I do for you today?” and “You are loved”. He had an infectious smile and big barreling laugh that even made strangers feel they’d known him for years. His sense of humor infected everyone he touched. His long-time jokes were conversational staples. His “back room” gatherings at the drug store after work were legendary as friends old and new would get off work and stop by for cocktails and conversation with Fritz before closing time. His compassion and help to those in need were often silent and unknown to others. He was a life-long friend to the Native American community, often providing work and housing assistance to those in need. He was in part responsible for the college education of dozens of children, from the reservation and the community. He was not only a husband to his wife Mary Anne, but a best friend. As a father, he always treated his children with incredible kindness, unwavering loyalty, and of course, an endearing sense of humor.

Fritz was a lifelong resident of Rushville, whose grandparents homesteaded in Sheridan County and owned the first general store in Pine Ridge. Fritz was a star athlete in high school garnering numerous mentions in the town paper for his notable plays. He attended Chadron State College where he played football, then transferred to the University of Nebraska. At NU, Fritz joined the ‘family fraternity’ Alpha Tau Omega. He graduated from the College of Pharmacy, following in his father’s and sister’s professional footsteps, and was a member of Kappa Psi Pharmaceutical Fraternity. During his education he was a member of the National Guard and the Army Reserve and was called up for duty following graduation expecting to go to Korea, but was stationed in Germany and served as a pharmacist for the 5th Mobile Army Surgical Hospital. In 1952 he married Mildred Reid in Denver, Colo., who accompanied him to Germany for a year. Fritz and Mildred then made their permanent home in Rushville where Fritz took over the Wefso Drug store from his father, and they raised their children Jim and Claire. He married Mary Anne Hollstein Rath on February 26, 1982 and was a wonderful step-father to Chris, Julie and Cyndi.

Fritz was an active leader in Rushville for many decades having served as mayor for 24 years. His service to his community spans an abundance of organizations and leadership positions, including: Service on the Rushville Cemetery, Hospital and Park Boards; President of the Chamber of Commerce and Rotary; Adjutant to the American Legion; Member of the Rushville Fire Department, Housing Authority, Airport Authority, BPOE Elks, VFW and the United Methodist Church. He was a long time Boy Scout leader and announcer for local sporting events. His service spanned to numerous county organizations including: President and long-time member of the Sheridan County Historical Society; Chairman of the Sheridan County Republican Party; Chairman and cofounder of the Northwest Nebraska Community Action Council; and President of the Western Nebraska United Chamber of Commerce. He served in state organizations: Chadron State Foundation; Ambassador to the Knights of Aksarben; Nebraska State Nursing Home Board; Nebraska State Historical Society, where he also served as President. In 1980, Fritz was honored with the Bowl of Hygea Award, the American Pharmacists Association’s highest honor for outstanding pharmacist and record of civic leadership in his community. Fritz “retired” in 1993, and continued to volunteer, for TeamMates and other good causes, and enjoyed traveling with Mary Anne and their great travel friends known as “The Dirty Dozen”. He was lovingly cared for in his final time by Mary Anne, Julie, Pioneer Manor and Gordon Hospital.

Arrangements are being handled by the Chamberlain Mortuary in Chadron. In lieu of flowers memorials may be made to the Rushville Community Fund, under the Nebraska Community Foundation, for the continual endowment of the city of Rushville. c/o Security First Bank, PO Box 550, Rushville, NE 69360.

On line condolences may be left at www.chamberlainchapel.com

More in this category: « Jack Fuhr Jack A. Cook »