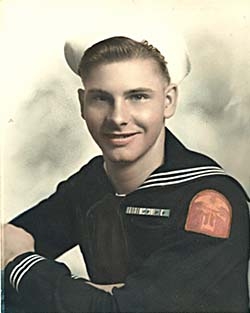 Funeral services for Jack Arthur Cook, 91, Valentine, Neb. will be held Wednesday, April 8, 2015 at 11:00 a.m. at the Methodist Church in Valentine, Neb. Military services and burial will be at the Rushville Cemetery, Rushville, Neb. at 2:00 MDT. Pastor Corey Jenkins and Pastor Bruce Beevout will officiate both services. Jack passed away at the VA Hospital in Hot Springs, S.D. on April 2, 2015 from pneumonia and heart failure. Holmes Funeral Home is entrusted with the arrangements.

Jack Cook was born to Frank and Alda (Blanche) (Alderman) Cook in Omaha, Neb. on March 21, 1924. Jack grew up on farms in South Dakota and attended country schools. He told stories of always getting into trouble, getting his name on the board, and having to stay after school a lot. His brother, Clyde, would get home before him so his parents always knew why Jack was late.

From 1942 to 1946 Jack served in the U. S. Navy during World War II. He was a helmsman, the person that steers the ship. He served in Guam, Philippines, and Guadalcanal. When he tells stories about his experiences in the war, he said that is when he truly knew there was a Lord. Jack’s most memorable day in the military was when he steered the ship for the landing of General Douglas MacArthur at Leyte Island, Philippines. He said standing next to him was quite an honor. Jack said MacArthur carried a pearl handled pistol and drove a Deusenberg, which he was assigned to guard.

After the war, Jack returned to Rushville, Neb. and met a lovely lady, Ramona Starr. They were married July 25, 1946 at Martin, S.D. To this union three children were born, Velda, Joyce, and Russel.

Jack and Ramona lived in Merriman, Neb., Rushville, Neb., Martin, S.D., and Hay Springs, Neb. Jack operated a Conoco station from 1957-1973. They then moved to Bridgeport, Neb., managing the Conoco. Jack and Ramona became managers of motels in Kimball, Neb. and Minatare, Neb.

After retirement, Jack and Ramona moved to Valentine, Neb. They were very active in the churches and the Senior Citizen’s Center. During the winter months they travelled to Zapata, Texas where Jack could be warm, have fun, and make many new friends. Ramona passed away on December 4, 2006.

Jack will be remembered as being very active and sharp until the last year. He could still stand on his head in his 80’s. Jack was a people pleaser. He loved trying to make people laugh with all of his jokes. He would always laugh, even if the person he was telling it to didn’t find it too funny. Jack always had positive things to say to make people feel better. He was always willing to help anyone in need. His funny wit and humor brought joy to many.