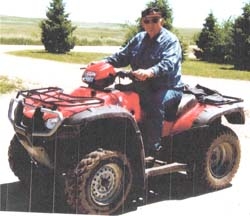 He was born July 18, 1924, at a farm near Clinton, Nebraska, to Frank and Emma (Anderson) Divan. A few years later they moved to a farm north of Gordon, where he grew up and attended Pleasant Hill School.

On June 30, 1943, Frank married Zelma Bayliss in Rushville, Nebraska. The couple farmed with his parents until 1949, when they moved to their farm/ranch north of Batesland.

Frank and Zelma worked together for many years building their farming and ranching operation. Other than a few hunting/fishing trips, Frank rarely left his farm. He was a hard-working man who had a mischievous side and enjoyed a good chuckle. He had a love of the land and took pride in his family and farm. In his later years, he spent the majority of his time on his four-wheeler with his beloved dog Mitsy by his side.

One of his greatest enjoyments was the time he spent sharing a cup of coffee with someone sitting at his counter with him.

Funeral services will be held Saturday April 11, 2015, at 10:00 a.m. at the United Methodist Church in Gordon, Neb. Burial will be in the Gordon Cemetery.