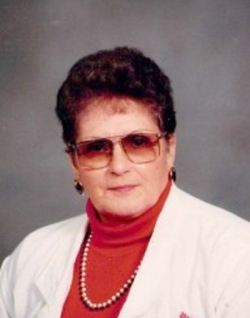 Memorial services for Juanita “Tiny” Charleen Merrill, age 75, will be held May 23 from 1:00 p.m. to 4:00 p.m. at the Rushville Senior Center in Rushville, Neb. Burial will be at the Hillside Cemetery in Oelrichs, S.D. following the memorial service.

Tiny helped run her parents’ ranch in Pine Ridge, S.D. and was proud to deliver U.S. Mail to the Star Route customers, which included Denby, Wounded Knee, Manderson, Rocky Ford, Porcupine, and Pine Ridge in the 1970’s. She was very proud to work alongside her mother, Alyce Merrill, who served as the postmaster for the Pine Ridge, S.D. post office.

Unfortunately, her parents’ ranch was sold in 1978, and Frank and Alyce moved to Hay Springs, Neb. Tiny moved to Nebraska as well and settled in Rushville with her children. She lived in Rushville from about 1980 until 2005 when she moved Craig, Colo. to live with her daughter, Shauana Merrill. While in Rushville, Tiny worked for the Sheridan County Sheriff’s Office as a cook from 1983-1989 when she became disabled from an injury unrelated to her work at the Sheriff’s Office. Tiny also worked as a bartender for the Stockman’s Bar and the Lounge.

Tiny loved studying her bible, embroidering, studying her ancestry, reading books, collecting recipe books, collecting eagle figurines and memorabilia, cooking (ranch style and for an army), canning, making crafts, going to yard sales, cruising mountain roads with Shane, playing on Facebook, playing Solitaire, painting the house she lived in her favorite color – red, remodeling everything she could in the house, and adoring her many grandchildren and great grandchildren. She recently began working with Shauana on her ancestry and family tree with which she was amazed and enjoyed immensely. Tiny often said she missed the ranch in Pine Ridge and wished she were still there or could visit. She loved ranching and working the land. It was one of her most prized memories that she loved to talk about and missed very much. Shane spent many hours and put many miles on his truck driving Mom around just looking at the ranches in the area and seeing the livestock and reminiscing. Oh, the stories she would tell.

Tiny was proud of her family and told them often. She made it a point to say she loved each and every one often because she knew that God could take her or another at any time. She enjoyed the small things in life and expected little from others. One of her greatest gifts was her ability to look past a person’s rough exterior and see the real person inside. She was quick to forgive but, true to her nature, always remembered and was quick to remind. She made herself available to anyone in need at any time – she was a Mom to many who were wandering, a friend, and the disciplinarian when needed – without question.

A memorial fund has been established, and monetary gifts can be sent to any Wells Fargo Bank, Acct. No. 2257279154, in c/o Shauana Merrill to be applied to burial costs, the purchase of a headstone and other memorial costs.