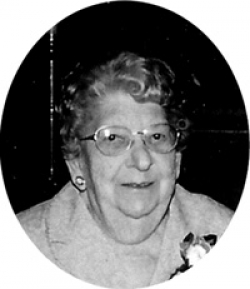 She was born August 5, 1922, in Clearwater, NE, to William G. Arthur and Josephine M. (Sand) Arthur. When she was an infant the family moved to a farm north of Gordon where she attended Sunny Knoll Grade School. When Mary Ann was 11, her family moved two miles north of Rushville, NE, where she finished her education attending Rushville Elementary School and Rushville High School, graduating in the Class of 1940.

After graduation she worked at the local dime store and cream station before marrying Oscar Van Kerrebrook on June 7, 1943. To this union William and four infants, who died at birth, were born.

Mary Ann & Oscar lived in various places in Sheridan County and briefly operated a small dairy west of Rushville until they moved to the family ranch in 1951. While living at the ranch she also cooked at the Rushville Senior Center for a few years. They moved from the ranch into Gordon in 1998 and she moved to Parkview Lodge in September of 2008.

Mary Ann took pleasure in her family, church, garden, needlework, bowling, playing cards and just being a Nebraska farmer’s wife. She made baby quilts for her granddaughters and embroidered tea towels, which she donated to the church each year for the annual bazaar. She was always very humble about her work, always insisting that the last ones completed were never as good as the previous ones.

A memorial has been established for Parkview Lodge Assisted Living. Memorials may be sent to ChamberlainPier Funeral Home at 101 N. Main St., PO Box 366, Gordon, NE 69343.