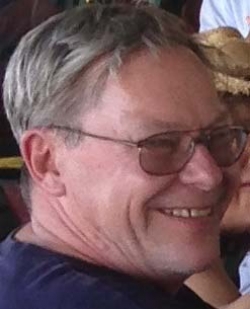 Larry R. Cushing, 58, of Scottsbluff, died Sunday, May 17, 2015 at Regional West Medical Center in Scottsbluff after a long battle with melanoma. His memorial service will be held at 2 p.m. on Friday, May 22, 2015 at Jolliffe Funeral Home with Reverend Lauren Ekdahl officiating, casual attire is requested. The family respectfully requests that in lieu of flowers, memorials in Larry’s honor may be made in care of the Panhandle Humane Society. Online condolences may be left at www.jolliffefuneralhome.com.

Larry was born Aug 8, 1956 in Rushville, Neb. to Dennis and Kathleen (DeWitt) Cushing. He attended school in Rushville and graduated from Scottsbluff High School. He married his high school sweetheart, Linda Nickelson on March 13, 1977. To this union, two sons, Larry and Landon were born. Larry worked in the auto industry for several years before becoming the territory sales manager for Phillip Morris USA (Altria). He soon became known as the “Marlboro Man” and worked there until he was unable to work due to ill health.

Larry loved Broncos football, Nebraska Cornhuskers and the white sandy beaches of Cancun… and don’t forget the music trivia at 18th Street on Fridays with his friends. He was a dedicated volunteer of the 23 Club where he served as coach, commissioner, groundskeeper, sign painter, concession taster, and anything else to keep the organization a success. Larry was a dedicated husband, father, son, brother, and grandpa.