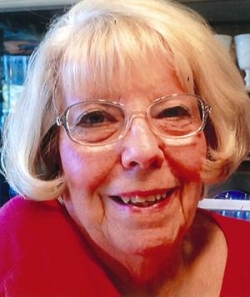 Carmen was born in Gordon, Nebraska to Nellie May (Hedges) and Folsom H. Gates on January 26, 1935. She graduated from Gordon High School in 1953. After graduation she attended Stephens College in Columbia, Missouri and Nebraska Wesleyan University in Lincoln, Nebraska majoring in music.

On August 18, 1955, she was united in marriage to Walter H. Birkby. After marriage they lived in Hays, Kansas, and Lawrence, Kansas while Walt was attending the University of Kansas and later moved to Tucson, where Walt received his PhD in Anthropology.

November 15, 1963, two children were born to this union, twins Julianne and Jeffrey Moss.

Carmen was a long time member of the Arizona DO-RE quartette and Old Adobe Chapter of Sweet Adelines.

She was preceded in death by her husband Walt, parents Folson H. and Nellie May “Ned” Gates, grandparents Newton and Lottie (Folsom) Gates, and father and mother in law Jerome and Margery (Moss) Kruger.

A celebration of Carmen’s life was held May 22, 2015, at Bring’s Funeral Chapel in Tucson.