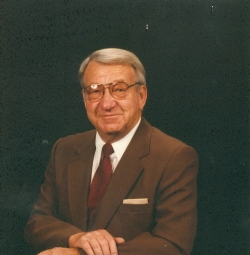 Armond was born in Jamestown, ND to Oscar and Agnetha (Aaseth) Berg on January 14, 1923. Armond graduated high school in Jamestown in 1941, traveled to Seattle, WA where he joined the Army Air Corp in 1942. While receiving military training he met the love of his life, Doris Goodin.   They were married on September 23, 1943, in Mountain Home, Idaho.   Armond was a tail gunner on a B-24 Liberator with the 8th Air Force in England completing 25 missions.   He was then assigned to the 15th Air Force in Italy  for another 10 missions.  He was discharged from military service in September 1945.

Armond and Doris settled in Gordon, Nebraska where he worked and while also giving flight lessons in small aircraft.

As a growing family with 4 children, Armond moved his family to Casper, Wyoming in 1956 where he was employed with the U.S. Postal service retiring in 1979. He and his wife enjoyed their retirement years traveling, wintering in Texas and Arizona until 1999. Armond always loved to dance and was an active member of Square and Round Dance Clubs attending several national conventions along with his wife, Doris. He was a member of First Methodist Church, was a volunteer at Fort Caspar Museum, a member of RSVP and the Good Sam Club. He was a regular at the Casper Senior Center for many years.

Armond was preceded in death by his wife on May 22, 2012, his parents, 6 brothers and 3 sisters, daughter, Marsha White, son in law Dan Thompson and 2 grandchildren, Aaron Berg and Pamela Thompson Doerge.