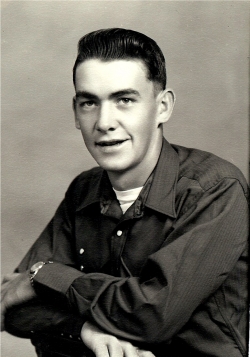 Frankie was born and grew up in Merriman, Nebraska, the son of Frank and Hazel Buckles. At a early age the Buckles family moved to Martin, South Dakota, and built a large cattle and farm operation. Frankie drove truck when the family owned a trucking company as well prior to moving to Martin.

In 1966, Frankie and his family moved to California where he began his career with Garrett Air Research and remained employed with him until his retirement 27 years later.

His marriage in 1953 resulted in four children of which two of his children passed away prior to his death.

In 1991 after retirement he and his wife moved to Lake Havasu City, Arizona where they built a custom home that was visited by friends and family for over 20 years.

He was a man that had the ability to build or fix anything he decided to do. Whatever he did was done with exact precision sometimes having to do it over and over again.

He had a love for Oreo cookies and milk and could tell you how many each row of the package had and how many days a package would last him.

Graveside Memorial Services will be held at the Gordon Cemetery, Gordon, Nebraska, Saturday, July 11, 2015 at 11:00 am, followed by a memorial celebration in Martin, South Dakota at the American Legion beginning at 1:00 pm.

Chamberlain-Pier Funeral is in charge of arrangements.