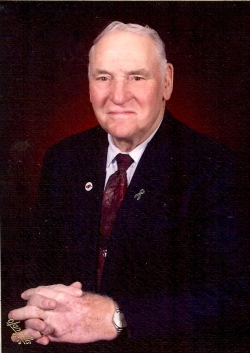 He was born at the family farm north of Rushville on May 14, 1932, the youngest of twelve children to Gerardus (George) and Anna Maria Petronella (Nellie) Roffers Janssen. His parents were strong, hard-working immigrants from Holland and his lifelong work ethic mirrored theirs. George began his love of working the land and cattle at the young age of nine with his thirteen year old brother, Mart, helping their Dad after three of the older brothers were called to war.

George attended grade school north of Rushville, riding the three miles from the farm on his horse, Chuck. His father passed away when he was only 14 years old, then he and his mother moved to Rushville where he attended high school and excelled in football, track and basketball. After recuperating from polio his senior year, he received two basketball Star-of-the-Week Awards from the Omaha World Herald and was named the Outstanding Athlete of the 1949 basketball tournament team. He graduated in 1949 and enlisted in the US Army at age 17 years. In 1955 he was honorably discharged from the US Army Reserve.

George married the love of his life and soulmate Lois Ann Voycheske on August 9, 1951 and four children were born to this union; Kenneth George, Sharon Ann, Gerald Wayne and Jeanne Marie.

For a few years George worked farm and ranch jobs, and as a plumber with his father-in-law, Louie Voycheske. Then on August 9, 1960 he and Lois moved their family to the Ferd Shald ranch southeast of Gordon where they lived the next 44 ½ years. They purchased the ranch in 1992 and worked it with their sons and grandsons. George was an innovative farmer and rancher, never afraid to try new ways to improve the quality of the cattle and land. He was proud of his cattle, especially his registered charolais herd, and he eventually raised charolais bulls.

George was very involved in church, community and agricultural organizations. He was a devout member of St. Leo’s Catholic Church, serving on the parish council and the Knights of Columbus for several years; the American Legion, Post #161; the Elks; Nebraska Cattlemen’s Association; the National Riflemen’s Association, a sales representative for VITA-Ferm feed; an active Co-Op member where he served on the Board of Directors; and was awarded the Nebraska Natural Resource Districts ‘Outstanding Tree Planter’ in 1998. He was also a member of the Gordon Rural Fire Department where he and sons Ken & Jerry chased and suppressed lots of fires and even outran a tornado!

Friends, family and acquaintances knew that he loved God, his family, farming, ranching, dancing to ‘good old country’ and polka music, and Nebraska football. Even though he never had a music lesson, he played many instruments ‘by ear’ including the guitar, piano, harmonica and accordion. His singing and yodeling will be forever missed. As an avid Nebraska Husker fan, he and Lois enjoyed many Lincoln football games. George was an avid hunter and enjoyed striving to “win the big one” playing slots.

George and Lois sold the ranch in 2005 due to health issues and moved to Gordon where he resided until his death.

Grandson Jade Berry said, “Bonka was a man that every man should strive to be like; hardworking, dedicated, with an amazing faith in God.”

George was preceded in death by his parents, all of his eleven siblings and his loving wife, Lois in 2008.