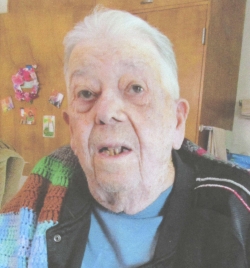 Funeral services for Eugene Wolvington, 90, of Chadron, Nebraska will be held on Monday, July 13, 2015 at 2:00 PM at Chamberlain Chapel in Chadron with Randy Gulbranson officiating.  Burial will be at the Hay Springs Cemetery at approximately 3:00 PM.

Eugene Earl Wolvington was born on October 12, 1924 at Wolvington, Nebraska which was a United States Post Office established by James Wolvington, who was Eugene’s grandfather.  He was born to Earl and Frances (Hanks) Wolvington.  He worked on the family farm while attending school at Pleasant Home Rural School and Hay Springs High School.  He was an FFA member and he graduated from High School in 1942.

He was proud of being a life time Christian and member of Pleasant Home Sunday School and later a member of the Open Door Church.  Eugene met and married Mary O’Donnell, the love of his life on August 4, 1951 and to this union two children were born, Rosemary and Randy.  Eugene enjoyed spending time with family, his children, grandchildren (Patrick, Robert, and Michael (Donna), great grandchildren (Rylee and Luke) and friends.  He was happiest when he was surrounded by his family and friends.

A memorial has been established for the Chadron Rescue Unit.  Donations may be sent to Chamberlain Chapel, PO Box 970, Chadron, NE  69337.