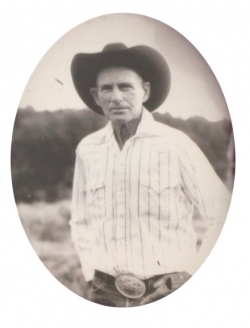 Dean Eugene O’Bryan was born Oct. 24, 1925 at Wood SD to Francis Zeno (Skinny, Zen) and Jeanette (Dale) O’Bryan the fourth of 10 children. He passed away at “High Noon” on July 11, 2015 at the Bennett County Hospital surrounded by family and friends, following a short battle with a variety of afflictions possibly related to lymphoma.

Dean grew up in the area west of Parmelee and SE of Norris where he traveled to school with his siblings often on horseback until his junior year when he went to Gregory SD to work for his Uncles: Bill, Claude, Walt and Charlie Dale at the sale barn, gas station and later trucking hogs mostly to the Sioux Falls packing plant.

After graduation he enlisted in the Navy in Oct. 1943. He was assigned to the USS Orvetta, a troop transport and barrack ship which left Pearl Harbor on July 4, 1944 to serve in the Pacific Theater till August 1945. While stationed in Shanghai China, though eligible for discharge, he was held over as head of the Navigation and Communication Division until his ship was taken to Subic Bay. He was then offered a slow boat for a scenic route but chose a more direct route home for discharge in June of 1946.

After a period in the Merchant Marines he returned to South Dakota to work for Walt Dale on his ranch near Patricia, west of Long Valley. While attending a dance and a show in Martin he met Hazel Ione Coats, his wife of over 65 years.

Dean and Hazel were married New Year’s Eve, 1947. They continued to live at Walt’s in a small house he provided for the couple and soon three sons, Ed, Larry and Lonnie, were added to the family.

In 1952 the family moved to their modest new 4 room home with an entry way (electricity and running water were added later along with two more bedrooms and a bathroom) that Dean built near Sharps Corner west of Kyle SD. Over the years 4 more sons, John, Doug, Kurt and Todd joined the family.

Dean and Hazel worked not only on the ranch but took on extra professions, Hazel at Rockyford School as cook and teachers aid, Dean working with a construction company building roads in the area as a truck driver and road grader operator. He worked for Shannon County for many years as a blade operator, grading roads and fire trails in a wide area sometimes staying overnight with neighbors when on a longer run.

In all his endeavors he strived to do things the “right way” (although he said he fixed a fence just good enough to not fall down) a hard worker (he said he was lazy and did things to eliminate more work later), being innovative, (loaded horses in the pickup without a stock rack) always being economically conservative, having learned from the hard times while growing up “dirt poor” in the thirties and mindful it could happen again.

In the early years his used a team of horses (Cindy and Buster) to put up hay until he upgraded to a Farmall H tractor, pitched hay until he again upgraded to a new used “H” and a new small square baler. To help the boys know the value of money and getting paid to work, Dean payed them 5 cents a bale to haul bales for some spending money. He was highlighted in an article in the New York Times (‘Alone in the Badlands’) in 1998 where the writer indicated “he wore a hat that was stitched and re-stitched and was practically more hole then hat.” (which is said prompted him to go to town and get a new hat).

He took great pride in building a quality cattle herd and in the early 60s became one of the first ranchers in the area to utilize Artificial Insemination. With the help of the boys he created the seed stock that Todd, Ed and Larry would later utilize to provide quality bulls for area ranchers.

He enjoyed riding and breaking horses, was well known in the area, highly demanded by neighbors as a brand inspector and dehorner specialist which may have led him to use Angus cattle to build the herd.

Dean continued to work the ranch until Todd was able to take the reins and when Larry decided to move back to the ranch, Dean mostly retired, moving to Martin to help care for Hazel who was beginning to have some health issues. He would continue to travel to the ranch, blading the trails, fixing fence or doing other maintenance items that he decided needed attending to.

Dean and Hazel loved dancing and country music, card parties and get togethers with family and friends. They attended church for many years at Porcupine and later Our Redeemers Lutheran Church in Martin. They made sure the boys were grounded in the knowledge of the Lord and Savior Jesus Christ. Dean professed his faith and assurance in Christ and would study the Bible and quote scriptures to share with others and reinforce that faith.

Funeral services will be held Thursday, July 16, 2015, 10:00 am at the Martin Activity Center in Martin, SD, with Jeff Siscoe officiating.  Burial will be held in Martin Community Cemetery.  A memorial has been established and donations may be sent in care of Bennett County Funeral Service, PO Box 65, Martin, SD 57551.