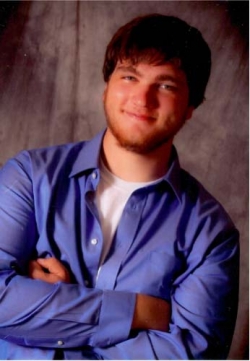 He was born March 21, 1994, in Chadron, Nebraska, to William Kyle Metzger and Jeannine Gordon Metzger.  Chris grew up in Gordon, Nebraska, where he attended Gordon Elementary School, Gordon-Rushville Middle School and graduated from Gordon-Rushville High School in May of 2012.  While in school Chris participated in various activities, however, his fondest memories were of time spent with numerous friends and family throughout his childhood and into adulthood.

The greatest love of his life was delivered to Chris and his fiancée, Courtney Trennepohl, as their son, Brylyn Andrew Metzger was born December 26, 2011 in Chadron.  Chris had a very loving heart and was a great father; he truly loved Brylyn and Courtney.  He dedicated his life to them until his death.

After graduating from high school, Chris attended Chadron State College for two years before taking a job in March of 2014, as a car man for BNSF in Alliance, Nebraska.  During this time he and his family took up residence in Rushville.

Chris enjoyed hunting and fishing with his brothers and friends, throughout his life, spending time with family, but most of all, spending time with his son, Brylyn and Courtney.  He was a very hard worker and a very good friend to many, many people in the Gordon and Rushville communities.

Chris was preceded in death by two very important people in his life, his grandfather, William Kenneth Metzger and his “Big Buddy”, Bruce Moore.

Memorial Services were held Friday July 17, 2015, 10:00 am, at the Gordon-Rushville Middle School in Rushville, NE, with Reverend Al Trucano officiating.  Inurnment burial was held in the Gordon Cemetery.

A memorial has been established for an Education Trust Fund in Brylyn Metzger’s name.  Memorials may be sent in care of Chamberlain-Pier Funeral Home, PO Box 366, Gordon, NE 69343.