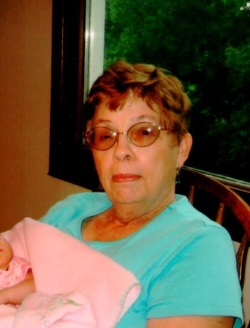 Anne L. McCracken, 79, of North Platte, passed away July 27, 2015 at Great Plains Health.  She was born July 30, 1935 to Homer and Arvelyn (Olson) Hinton at Cody, NE, with Anne’s great grandmother, Anna Bohman assisting.  Anne grew up south of Cody on a ranch and attended District 46, Cody grade and Cody High School, graduating with the class of 53.  She went on to Chadron State College earning a Bachelor’s Degree.  Anne taught school for 45 years at various schools in Nebraska ending her career at Adams Middle School.  She was a Silver Star Alpha Delta Kappa and Beta Sigma PHI.  On August 20, 1960, she was united in marriage to Richard McCracken at Chadron, NE.  They had two sons, Gary and Bruce McCracken.  She was a member of Episcopal Church of Our Savior. Anne enjoyed playing bridge, camping, fishing and spending time with her family.  She was preceded in death by her husband; her parents; and grandparents.  She leaves behind her sons, Gary (Becky) McCracken of Broken Bow and Bruce (Kay) McCracken of Gering; a sister, Karen (Hinton) Gere of Littleton, CO; grandchildren, Brenton McCracken, Sarah Heckenlively, Heather (Troy) Rask, David McCracken and Shelby (Kara) McCracken; great grandchildren, Wyatt and Reagan Heckenlively, Tristen, Alyssa, Aaralyn, Urwin, Kaine and Tucker McCracken; and a friend, Al Gordon.  Memorials are suggested to EPOS Episcopal Church of Our Savior.  Online condolences may be shared at www.carpentermemorial.com.  Cremation was chosen.  Services will be 10:00 a.m. Friday, July 31, 2015 at Episcopal Church of Our Savior with The Rev. Dr. Jeffrey S. F. Nelson officiating.  Inurnment will be at Episcopal Church of Our Savior Columbarium.  Those wishing to sign Anne’s memorial book may do so from 9:00 a.m. to 5:00 p.m. Wednesday and Thursday at Carpenter Memorial Chapel, which is in charge of arrangements.