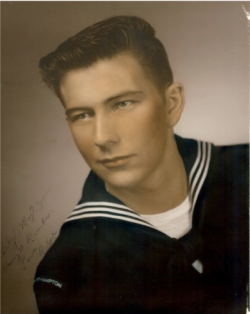 He left home in O’Neill, Neb. at an early age and rode the train to Rushville, Neb. and became the foster son of Rolf and Thelma Frank. He graduated from Rushville High School in 1954.

Ralph enlisted in the United States Navy Sept. 15, 1955, and his ports of call included Trinidad, Guantanamo Bay, Naples, Capri, Casablanca, Rio De Janeiro, Stockholm, and Portsmouth, England. In Portsmouth, he met Victoria Collins. They were married in Rushville on Oct. 5, 1958.

After being honorably discharged Sept. 11, 1959, he returned to live in Gordon and work for Consumers, later Nebraska Public Power, as an electrician. Later on, he was a self-employed electrician.

Ralph was a city council member for 8 years and the vice mayor. He was a member of the Gordon Volunteer Fire Department. For several years, Ralph maintained the ice skating rink in Gordon. He volunteered many hours spraying layers of water to freeze for a smooth finish, scooping off the snow, and starting the bonfire. He won the Aksarben Good Neighbor Award for his commitment to the community.

Ralph’s favorite hobby was fishing. He had several Master Angler awards. He also enjoyed woodworking, slot machines and poker, finding treasures at auctions, and the morning coffee group. He was a fan of high school rodeo and knew many of the entrants when his grandchildren were participants. Ralph was very generous with his time and talents, always glad to help those he could. Several of his barn wood picture frames were donated for fundraisers.

He was preceded in death by his parents and foster parents; one foster sister; two brothers; three sisters; and a grandson Andy Child.

Memorial services were held Wednesday, Sept. 30, 2015, at the Chamberlain-Pier Chapel in Gordon with Pastor Bill Combs officiating. Inurnment will be at the Rushville Cemetery at a later date.

A memorial has been established for the Gordon Volunteer Fire Department, and donations may be sent in care of Chamberlain-Pier Funeral Home, PO Box 366, Gordon, NE 69343.