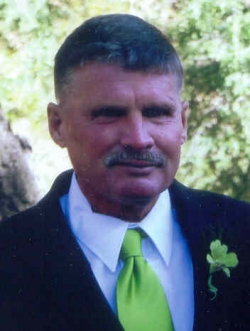 Michael (Mike) Francis O’Bryan took his final rest from his labor at his cherished ranch home in Pine Ridge S.D. on September 29, 2015 at 65 years old. He had a heart attack and died with his beloved partner, Una Nelson and friend Larry Merrill by his side.

The funeral service for Mike will be at Chamberlain Chapel on Monday, Oct. 5th at 10 a.m. There will be a pot-luck luncheon at the Legion in Chadron at 11:30 a.m. following the service.

Mike O’Bryan was born in Martin, S.D. on Jan. 15, 1950 to Charles O’Bryan and Shirley (Hamilton) O’Bryan. He was the second oldest out of eight siblings. As a young boy, Mike grew up wild with a heart full of adventure. At six years old he was climbing up the legs of the neighbor’s spotted horse because he was too short to reach up and put on the saddle. He valued saving money at a young age and worked hard enough to buy a BB gun.

He attended school from kindergarten to third grade in Porcupine, S.D. and his family then moved to Norris, S.D. There Mike and his younger brother, Chuck, each got their first horses and soon after had them broke enough to ride.

In 1965, at age 15, Mike left South Dakota to live with his Uncle Tom O’Bryan in Bagley, Minn. to work as a ranch hand. Later that year, Charles, Shirley and the children came to live in Bagley as well and Mike attended and graduated Bagley High School in 1968.

In 1967, at age 17, Mike married Terry Olson and had a son, Jeffery (Jeff). Mike took pride earning a living and supporting his young family. After he graduated high school, Mike, Terry and Jeff moved to Minneapolis, Minn. where Mike worked as an equipment operator and truck driver. Several years later, Mike and his family moved back to Bagley, where he and Terry divorced.

In 1980, Mike bought property from his father, Charles and began building a house with the help of his friend, Travis Larson. In 1981, Mike married Laurie Foldoe and finished building his house and his first welding truck. In 1983, he had his only daughter, Billie Jo. A year later he had another son, Michael (Mike). Using his talents and skills as a welder, truck driver, logger and equipment operator he worked all over the country from Barrow, Alaska with his brother, Pat, to Quanah, Texas and everywhere in between.  However, his desire to ranch full time and longing to return to the prairies of his youth were too strong to fight and in 1991, he moved Laurie, Billie and little Mike to Hot Springs, S.D.

Mike was known to take risks and seize opportunities and took a chance raising ostriches. Soon he bought his ranch in Buffalo Gap - building another house with the help of his brother Pat. The ostrich “herd” grew quickly and sold quickly. It was quite a sight to see Mike wrestling an eight foot bird into a horse trailer.  Laurie, Billie and little Mike helped raise the ostriches so Mike could spend much of his time hauling railroad ties. His family’s hard work paid off and Mike bought his beloved ranch in Pine Ridge, S.D. Soon he was able to ranch full time and put all his energy into building his legacy.

In 1999, Mike was united with his son, Gary Ubert, born to him in his late teens. Gary, his wife Lisa and their three sons enriched Mike’s life even more and made him a grandfather.

As the years went by, Mike continued to build his legacy. He added more property in Chadron, Neb. to his estate and divided his time between the ranches. Each day was spent working from sun up to sun down - fixing, building, farming, laboring. His two hands carved out a living from everything they touched. In 2005, Mike and Laurie divorced and he moved permanently to his ranch in Pine Ridge. There he met Una Nelson, his beloved partner with whom he spent the remainder of his days.

In his later years, his many grandchildren were a source of great comfort and joy to Mike. He enjoyed having them at his ranch, giving them four-wheeler rides, shooting prairie dogs with them or sitting them on his lap while he cut hay.  Mike’s love for his family, neighbors and friends was apparent in his generosity. He shared the fruits of his labor often and was always there to help a friend in need. Mike had a God-given ability to build something from nothing and to succeed by the sweat of his brow. His last days were spent rounding up horses on his ranch with his son, Mike, in the warm South Dakota sunshine. Mike O’Bryan was a one of the last of his kind - a true whiskey drinkin’ cowboy from the Wild West.

A memorial has been established.  Donations may be sent to Chamberlain Chapel, PO Box 970, Chadron, NE  69337.