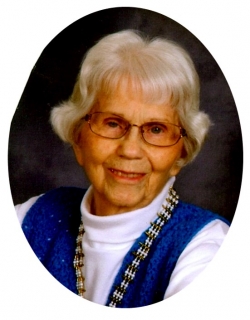 Marie Clements died Sept. 16, 2015, at Regional West Medical Center in Scottsbluff, Neb. She was born Aug. 25, 1920 in Rushville, Neb., to Frank and Elizabeth (Heesacker) Dieriex, in the house built by her Grandpa Heesacker. Marie was the middle of five children and grew up with sisters Frances, Alberta, and Eileen and one brother, Dave.

She attended kindergarten and first grade at St. Mary’s Catholic School before she was five years old. She continued there until the school closed the year she finished eighth grade. She graduated from Assumption Academy in Chadron, Neb., in 1937.

Marie and Leonard ‘Bud’ Clements met in school and were married in 1938. They worked for Marie’s folks on the ranch south of Rushville. Their daughters Moneen and Mary were born while they lived there.

Bud enlisted in the U.S. Army Air Corps when World War II broke out. Marie, with their two small girls, followed Bud to the different bases where he was stationed. Son, Jerry, was born two months before Bud was deployed overseas in 1944. Bud was killed in action in March of 1945.

Marie married Bud’s brother, John, in 1946 when he was discharged from the service. Sons Joe and Jay were born to this union.  Marie was a busy homemaker and mother while John worked as a carpenter. In 1958 they moved to Dodge City, Kan. John died in 1962 from brain cancer.

Still having the three boys at home to support, Marie enrolled at the Junior College in Dodge City, taking a clerk-typist course, passed both state and federal civil service tests and then worked for the Kansas State Road Department for 8 years as a secretary. Later she worked at Woolworth for 10 years, retiring in 1987 and moved back to Nebraska where she made her home in Alliance, until her death at age 95.

She was a member of the American Legion Auxiliary, Gold Star Wives, Daughters of Isabelle (Catholic) and the VFW Auxiliary. Marie enjoyed knitting on her knitting machine and crocheting, making numerous beautiful afghans, sweaters, caps, and scarfs for her family.

Marie was a member of Holy Rosary Catholic Parish in Alliance for over 30 years and was also affiliated with Immaculate Conception Church in Rushville.

She realized her last wish when all five of her children gathered in Kansas City, to celebrate her birthday on Aug. 25, just three weeks before her death. It had been 53 years since all five had been together!

She is predeceased by her parents, both of her husbands, Bud and John; her three sisters, Frances Sheaff, Alberta Fredricksen and Eileen Sandman, as well as her grandson, Daniel Snider and son-in-law, Brant Rasmussen.

The family suggests memorial donations to the Donor’s Choice and donations may be sent in care of Chamberlain-Pier Funeral Home, PO Box 366 Gordon, NE 69343.