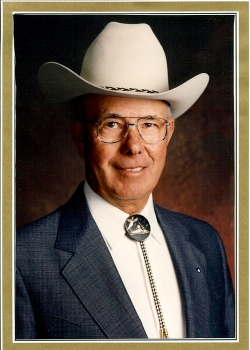 On Oct. 11, 2015, Elbert M. Strasburger walked into the arms of Jesus after a month long battle with various health issues. His son, daughter, spouses and dear friend, Paul Simmons were at his side.

Elbert (known as Eb to most)” was born on Jan. 16, 1922 to William and Elsie Strasburger in Rushville, Neb. He spent his childhood years in the heart of the sandhills developing a love for ranching. He attended country school through the ninth grade and then attended and graduated from Alliance High School in 1939.

As many young men his age, he felt called to serve his country in WWII and joined the Marine Corp and served in the South Pacific as well as China.  During his years of service he married Ellen I. Mendenhall, who prayed and awaited his return home. Upon his discharge, he returned to the hills that Eb loved, and began ranching with his father, brothers and eventually son. Myra was born in 1947 and John came along nine years later.

Eb loved ranching and was never so happy as when John decided to join him after his graduation from college. This father/son relationship allowed Eb to work on the ranch right up to the time of his passing. He truly loved ranching and worked with great passion.

He had many interests in life mostly centered around his faith and agriculture. He was a founder of the Pleasant Point Community Church serving in many capacities including 65 years as a board member. He also was an active member of the Gideons and took great pride in distributing bibles throughout his community.

As a young man, he was instrumental in starting the Heart of the Hills 4-H club and worked with youth and their stocker feeder projects.

Eb also served on the board of the Federal Land Bank and the Gordon School Board. An interesting fact about Eb was his involvement in making roads in the rural areas south of Gordon. In the 1960’s, he, Merrill Hebbert and Bill Lambert started a road paving company. Including the many private roads they built making ranch travel easier, they also built the Gordon Cemetery Road and the runway at the Gordon airport.

His claim to fame was his weekly commitment to his bowling league. No matter the weather, including many blizzards, the local community would know that the roads would be cleared as the Strasburger brothers had to get to the bowling alley on Tuesday night.

But of all the jobs he held and the activities he participated in, his attributes of compassion and patience made him the great man that he was. He loved his wife, children and grandchildren dearly and endeavored to be a good friend to all who knew him. His love for God was reflected in how he cared for family and friends and those who knew him were better people having had his influence in their lives. He truly lived a life worth modeling.

Elbert is survived by his wife Ellen of 70+ years (they would have reached 71 on Nov. 3), his daughter Myra and husband Joe, grandchildren Desiree McCullough, Damon McCullough and wife Amy all of Moses Lake, Wash., and his son John and wife Mel from the Gordon area. He’s also survived by brothers Pat and wife, Vesta and Dean and wife, Eleanor also from the Gordon area. He is also survived by many nieces and nephews, and great nieces and nephews, especially close are Eli and Ileigh and their parents, Ben and Stormy Hunter who work on the ranch.

The family would like to extend a special thanks to Dr. Cassie Banks for her medical care, concern and compassion, Ralph and Marian Beutler for their visitation and care for the family and Ellen and a very special thanks to Paul Simmons who was with us at the end and provided great comfort and words of peace.

The family suggests that memorials be made to Pleasant Point Community Church or the Gideons International. Memorials can be mailed to Chamberlain Pier, P.O. Box 366, Gordon, NE 69343.