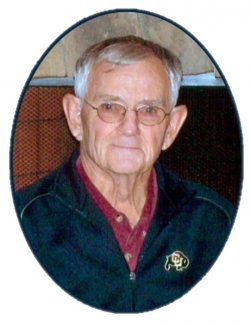 Gordon Perry Mills was born on March 28, 1933, in Gordon, Neb. to Milbourne Weiler Mills and Helen Vollintine Mills. He passed away Sunday, Oct. 11, 2015, at the age of 82, at his home on the Niobrara River, surrounded by his family.

Gordon attended Grade School and High School in Gordon, graduating in 1951. It was in grade school and high school that his love of athletics began and that love was passed on to many in the years that followed.

On Sept. 5, 1951, he married his high school sweetheart, Donna Walters and they were sweethearts for 64 years. This union was blessed with 4 children, Daneta, Keith, Margaret and Scott. They were the center of his world.

After attending college in Nebraska and Colorado, Gordon and Donna returned to Gordon in 1953, where he began working on the family ranch. In 1957, he and Donna moved their family to the ranch, where he remained until his death.

In addition to the ranching, which he loved, he was active throughout the years in many things. Gordon was very proud of having achieved the honor of Eagle Scout. He helped other young men achieve that goal while serving as a scout leader. Gordon was active in the organization of the Gordon Community Theater, performing and directing many of their productions, both musicals and plays. In the early 60’s, Gordon served as Nebraska Commissioner of the Baseball National Semi-Pro League. He was a member of the Gordon United Methodist Church for 74 years… 45 of those years he was instrumental in the church’s music program. You cannot think of Gordon without having a memory go through one’s mind of him singing. He used this special gift of a beautiful voice to sing in many a play, a cantata, at numerous weddings or funerals. Gordon served on Gordon and Gordon-Rushville School Boards, serving many years as its President. He played a big role in the efforts and successful accomplishment of consolidation of the Gordon-Rushville school systems, a move to the future that he was so very proud of. You cannot say Gordon’s name that you don’t think of the University of Colorado Buffs, where he was a faithful fan and supporter for over 60 years.

Gordon touched the lives of hundreds of young people as he came in contact with them while driving the bus to numerous school events, interacting with them when meeting them in the hallways, during the countless hours he was with them while coaching football, basketball and track or by just being their most supportive fan in the stands. He was honored by Nebraska State Interscholastic Athletic Administrators Association for Outstanding Service to Nebraska High School Athletics in 2004.

Gordon’s greatest pride and joy was following and supporting his children, grandchildren and great-grandchildren’s activities and sporting events through the years.

Funeral services were held on Friday, October 16, 2015 at the Gordon United Methodist Church with burial in the Gordon Cemetery.