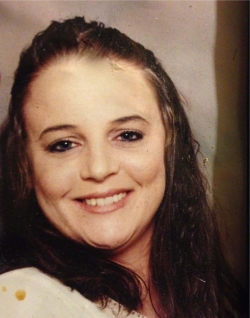 Heather grew up in Rushville, attending both grade school and high school. She was baptized and made her First Holy Communion in the Immaculate Conception Church.

On June 24, 1995, Heather married James Grumbles in Gordon, Neb. To this union three children were born.

Later on Heather met her significant other, Rob Kenny. They moved to Champaign, Ill. Here her fourth child was born.

Heather’s love, pride and joy were her four children. She loved to cook and work in the garden. She had a great love for all animals. She was a fan of the Nebraska Cornhuskers and the St. Louis Cardinals.

Heather worked several different jobs in her lifetime, however her favorite was caring for the elderly in the nursing homes.

Heather is survived by her four children, Makayla, Zachary, and Brianna Grumbles of Hemingford, Neb., and Brock Kenny of Greenville, Ill.,  her parents Robert and Geri Ann Landreth of Rushville, Neb., her brother Jimmy Landreth and his wife Jess, their children Brandon, Madison, and Kaleb of Chadron, Neb., Rob Kenny and his mother Ginny Kenny (whom Heather always considered her second mom) from Greenville, Ill., Grandparents Dan and Ruth Schmaltz of Rushville, Neb., and Margaret Landreth of Hay Springs, Neb., and numerous aunts, uncles, and cousins.

A memorial has been established for Heather’s children. Donations may be sent to Security First Bank, PO Box 550, Rushville, NE 69360.